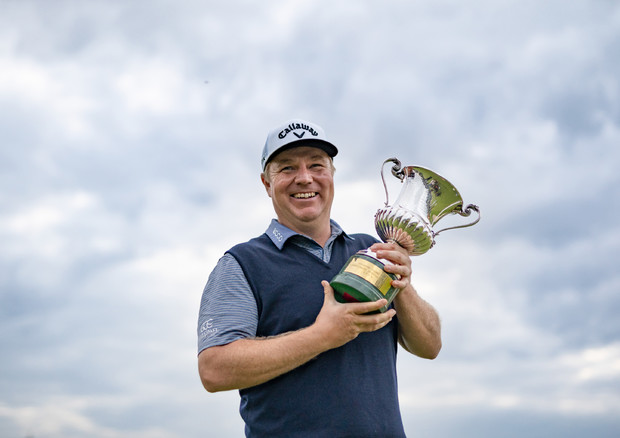 (ANSA) - BRESCIA, OCT 26 - England's Ross McGowan won the 77th Italian Open on Sunday, edging countryman Laurie Canter and Belgium's Nicolas Colsaerts with a chip-in from the bunker on the 16th and a birdie at the last.
McGowan, 38, carded a 20-under-par 268 to his two chasers' 19-under-par 269 at the Chervò Golf Club San Vigilio at Pozzolengo near Brescia north of Milan.
It was the Basildon man's first European Tour win in 11 years, since he won the Madrid Masters 2009, his only other victory on Europe's premier tour.
McGowan succeeds Austria's Bernd Wiesberger, who won last year.
The Aston Villa fan, turned professional in 2006 after graduating from the University of Tennessee, described his chip-in on the 16th and his 18th hole birdie as "two miracles.
"I'm finally back," said the Englishman who was 560th in the world going into the tournament.
It was a great battle that made me proud. But now's the time to go and drink a nice glass of red wine and celebrate what the future will bring me too".
Italy's highest finisher was Guido Migliozzi, joint 22nd with 275 (-13), who cradded the lowest round of the day, a seven-under -par 65.
Francesco Laporta and Federico Maccario were joint 30th on 12 under.
Italian Golf Federation President Franco Chimenti said "the Italian Open 2020 has been an incredible success".
He said "now we await everyone next year at the Marco Simone Golf & Country Club in Rome, which will also host the Ryder Cup 2023." (ANSA).