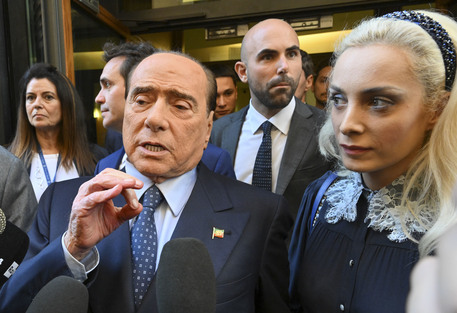 (ANSA) - ROME, OCT 19 - Three-time ex-premier and media mogul Silvio Berlusconi appeared to dismiss Ukrainian President Volodymyr Zelensky in record remarks to his centre-right Forza Italia (FI) Tuesday, according to a recording by the Lapresse news agency.
"I can't see how (Russian President Vladimir) Putin and Zelensky can sit at a negotiating table," said the 86-year-old FI leader, who was previously recorded as saying he had reconnected with Putin, swapping bottles of vodka and lambrusco, as well as "sweet" letters.
"Because there's no possible way. Zelensky, in my view...forget about it, I can't say", the recording went on.
Berlusconi recently said Putin was pushed into the Ukraine war, wanting to replace Zelensky with "decent" people.
Lapresse's recording published Wednesday also had Berlusconi saying that Putin "went into Ukraine and found himself faced with an unexpected and unpredictable situation of resistance on the part of the Ukrainians, who started from the third day to receive money and arms from the West. And the war, instead of being a two-week operation, became a 200 year or more war." photo: Berlusconi with partner and FI MP Marta Fascina, 32 (ANSA).