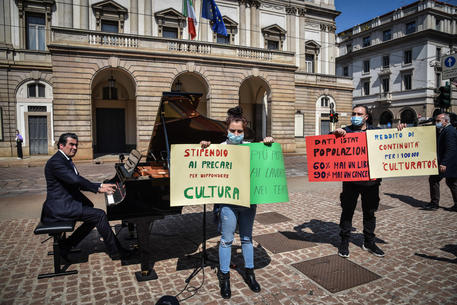 (ANSAmed) - MILAN, APRIL 20 - Alberto Veronesi, orchestra conductor and musical director of the Puccini Festival in Torre del Lago (Lucca), brought a piano to Milan's Piazza Scala and began playing the first act of Bohème, when the penniless artist Rodolfo and Mimì meet.
Singers tied with ropes performed the Puccini opera in a symbolic gesture purposely staged in front of the most famous opera house in the world, to raise awareness on the situation of those who work in the theatre sector, holding signs with slogans such as "Wages for temp workers" and "Salary for culture workers".
This is not Veronesi's first show/protest; on March 31 he conducted a concert in front of the Lombardy regional government headquarters.
"We need to raise awareness about a serious economic, social and cultural issue that cannot be ignored by public opinion, because no one from on high will solve problems for those who are temporary, intermittent, not protected," Veronesi said.
In the most recent Milan city elections, Veronesi ran for office on the Sala list, announcing the initiative in Piazza Scala.(ANSAmed).