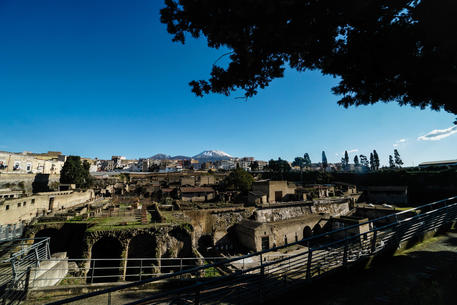 (ANSA) - ROME, 28 GEN - Archaeological excavations are resuming after forty years at the Herculaneum archaeological park, said park director Francesco Sirano.
The work will begin shortly and will take place in the area of the ancient beach, the shore of Roman Herculaneum, which was already partially excavated in the 1980s when the front of the city facing the sea was brought to light.
"The investigations will be closely tied to aspects of anthropology, geology, paleobotany, and conservation, creating a stable connection with the public, in-person and remotely," Sirano said.
The beach is currently located about four metres below today's sea level, a condition that has always posed problems in terms of managing the water.
In fact, to resolve this problem, specialists at the Herculaneum Conservation Project (HCP) brought another part of the beach to light between 2007 and 2010, uncovering archaeological evidence from both the most ancient phases of the site as well as the time of the eruption.
The project will take up work from this point and begin in the coming weeks.
The new dig will allow for reaching the level of the beach as it was at the time of the eruption, including on the western side.
Work will concentrate on restoring the ancient level, including bringing back sand to make it possible to walk the ancient shoreline with a new itinerary that will go as far as the Villa of the Papyri, finally connecting the two areas of ancient Herculaneum that have always been separated.
"We are resuming research on the land with renewed awareness of the complexity of the site and, thanks to a multidisciplinary approach, we expect further solid insights," Sirano said.
He said the project was "brought to life in synergy with HCP, a further component that shows how public-private collaboration is possible for the benefit of the public good and those who participate".
The project will take two-and-a-half years and will be carried out by a multidisciplinary team made up of technicians from the Herculaneum archaeological park, the culture ministry, and HCP. (ANSA).