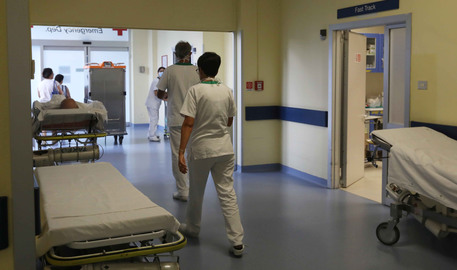 (ANSA) - MILAN, JAN 25 - AN Italian ER doctor was arrested Monday on suspicion of administering lethal drugs to two COVID-19 patients at a public hospital at Montichiari in the province of Brescia north of Milan.
The doctor, acting ward chief Carlo Mosca, has been charged with murder, police said.
He is suspected of deliberately giving the two patients anaesthetic and nerve and muscle-blocking drugs, causing their deaths.
The deaths occurred during the first wave of the pandemic, in March, police said.
The man has been placed under house arrest and police say there is a risk he may reoffend.
His suspected victims were aged 51 and 80.
Mosca is suspected of murdering the two patients to try to ease the pressure on the ER, which was being overwhelmed during the critical early days of the pandemic in northern Italy.
During the investigation, police uncovered a WhatsApp exchange between two nurses in Mosca's ER ward.
One allegedly said "I'm not going to stand by and watch someone kill patients just because he wants to free up beds" and the other replied "I'm not standing for it, he's crazy".
The exchange allegedly came after they were ordered to prepare the two drugs that allegedly killed the patients. (ANSA).