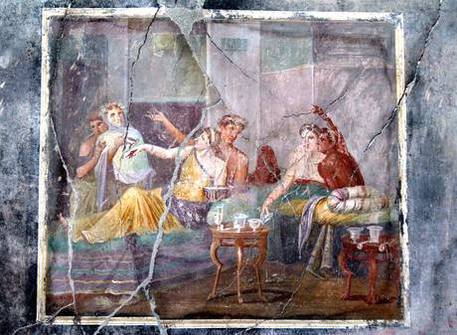 (ANSA) - Rome, February 18 - One of Pompeii's most famous houses is to reopen 40 years after it was seriously damaged in an earthquake, Culture Minister Dario Franceschini said Tuesday.
The House of the Lovers is one of the jewels of the ancient Roman city buried by an eruption of Vesuvius in 79 AD.
It is the only 'domus' whose second floor was almost completely preserved after the eruption.
"It is a story of rebirth and redemption, a model for all of Europe in the management of EU funds," said the minister on the completion of a major part of the EU-funded Great Pompeii Project.
During this part of the project, three domuses have been restored.
Franceschini will be in the ancient city later Tuesday to illustrate how the House of the Lovers was re-stabilised and repaired after the 1980 Irpinia earthquake that rocked Naples and the surrounding area.
The house owes its name to a Latin inscription on the right of the entrance: 'Amantes, ut apes, vita(m) mellita(m) exigunt.
Velle.' "Lovers like bees pass a sweet life like honey. I wish it was so." It has three male names beside it, and this has been taken to mean that the house was a brothel.
The structure dates back to the 1st century B.C according to the style of the exterior, the decorations belong to a period after 62 BC and paintings represent life and landscapes, with mollusks and fish in idyllic landscapes.
The Great Pompeii Project has transformed the archaeological site offering up a fresh trove of riches to its countless visitors.