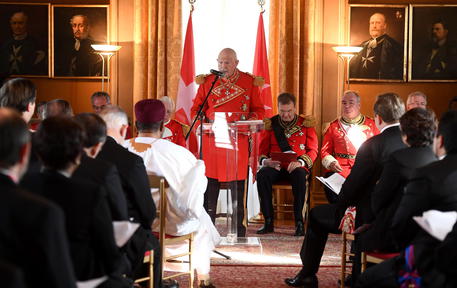 (ANSA) - Rome, January 10 - Knights of Malta chief Fra' Giacomo Dalla Torre del Tempio di Sanguinetto said in the sovereign order's traditional address to the diplomatic corps on Friday that the crises caused by men were a "scandal".
"In the last few years the number of people suffering from hunger has dropped, like the infant mortality rate: two important indicators of human progress," he said.
"But this trend risks reversing itself exclusively because of human actions and not for natural causes or ones linked to under-development.
"The real reasons must be sought in wars and civil disorder.
"This is a scandal and I urge all you ambassadors not to stop reminding governments of this intolerable danger".
He said "my hope is therefore that human diplomacy becomes ever mire an indispensable instrument to promote dialogue and peace and to resolve the decades-long conflict that are bloodying so many parts of the world.
"We find ourselves at the start of a new year for the traditional exchange of wishes with the hope that the year which is just beginning may be rich in new, encouraging prospects for peace and dialogue in the world.
"We leave behind a difficult year," said the Grand Master.
"The humanitarian crises in Syria, but also that in Yemen and Venezuela, the drama of the Rohingya people in Myanmar, are producing an ever higher number of displaced persons and refugees who are seeking shelter in the surrounding countries, now close to collapse.
"AS well as the great crisis which are sadly well-known, there are the more silent ones, such as the frozen conflicts in the Western Balkans and the southern Caucasus, the tensions in Eritrea, Burundi, the Democratic Republic of Congo and Mali, the emergencies in the Central American Northern Triangle, in Haiti and the Philippines region of Mindanao.
"We are witnessing a dramatic negative record of people forced to resort to humanitarian protection: over 130 million people in some 42 countries," said Fra' Giacomo Dalla Torre.
"The role of humanitarian agencies who work to alleviate suffering and for the common good of humanity is increasingly essential in a historic moment in which the principles and values - values such as solidarity, equality, respect of human and civil rights - on which democracy is based are being challenged.
"Our 80 thousand volunteers in 120 countries, our diplomatic network that embraces 109 states and the major international bodies, our 13,500 members and 42,000 medical and healthcare professionals are at work every day to give hope and relief to those who suffer from old age, from a disability, from sickness or from poverty." Fra Giacomo Dalla Torre recounted the main activities of the Order of Malta, in fighting human trafficking, the valorisation of the work carried out in the field by religious organisations and institutions, in medical, social, and health assistance in Syria, Lebanon, Turkey, Iraq, the West Bank of the Jordan, in Colombia with the Venezuelan migrants and in the Dominican Republic.
In Africa, the Order of Malta is carrying out projects in Uganda, South Sudan, the Democratic Republic of Congo, and Benin. In Asia, the Grand Master recalled its commitment in Myanmar and Pakistan. But the order's work is also in Europe, for example assisting the the population that has been a victim of the earthquake which has hit Albania, offering medical support to the elderly in the UK and France.
Finally, Fra' Giacomo underscored the order's work in the diplomatic field in 2019, recalling the official visit to Berlin, the meetings with the heads of State of Slovenia and Bulgaria and the president of Lithuania, the relaunch of ties of friendship with the government of Ecuador.
"Only through cooperation and constructive dialogue based on the principles of respecting human dignity can we contribute to ending the crises, violence, and give a better future to the new generations. This inspires the mission of the Order of Malta," he concluded.
The Sovereign Military Order of Malta (SMOM) runs a large charity-hospital organization around the world, and has recently provided humanitarian aid for countless refugees and migrants.
It has diplomatic relations with over 100 states and the European Union, and permanent observer status at the United Nations.
The Knights of Malta, as they are more widely known, were founded on the Mediterranean island in the 11th century as a military religious order like the Templars.
They were removed from Malta by Napoleon.
Headquartered in Palazzo Malta in Rome, their mission is summed up in their motto: "Tuitio Fidei et Obsequium Pauperum"; protecting the Catholic Church and serving those in need.