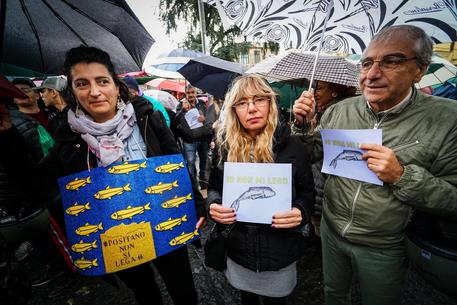 (ANSA) - Bologna, November 21 - "The party is over for populists", a group calling themselves 'Sardines' for how they pack squares around Italy against rightwing strongman Matteo Salvini said in their manifesto Thursday.
"Dear populists, you have now realised. The party is over," said the manifesto entitled Welcome To The Open Sea which the four young Bolognese leaders of the new movement, Giulia, Andrea, Roberto and Mattia, published on Thursday.
The manifesto was published on the Facebook page of the burgeoning movement.
With it, the four said, they aimed to coordinate and promote all events and flash mobs across Italy like the first rally against Salvini last week that brought 20,000 people to a crowded-out Bologna square. "We are the Sardines, and now you will find us everywhere," the manifesto said.
"Welcome to the open sea".
"We are many, and much stronger than you," the manifesto says.
"We will once again give courage to politicians with a capital P".
The Sardines sprang up in reaction to Salvini's claim in kicking off his campaign for January 26 regional elections in Reggio Emilia that he wanted to "free" the region of the centre-left Democratic Party (PD) which has ruled it for decades.
Former interior minister Salvini is again riding high in the polls after a blunder in which he pulled the plug on the last coalition government with the anti-establishment 5-Star Movement (M5S), and he led the centre right to a crushing victory in another centre-left stronghold, Umbria, last month.
Salvini had been hoping for "full powers" from the Italian people in his bid for a snap election which was foiled by an unprecedented alliance between the M5S and the PD.
His misstep knocked him back in the polls but he is again riding high amid strong opposition to the M5S-PD government budget, which he says is "all taxes", and his ever-popular anti-migrant and law-and-order policies.
Salvini has dismissed the Sardines saying he prefers "the cats that eat them".
On Thursday he said "I like anyone who demonstrates democratically for their ideas, but I choose my own books", when asked about an offer from the Sardines to give him some progressive reading.
After their stunning Bologna launch the Sardines had another successful rally in Modena at the weekend, another one in Sorrento Thursday, and are planning events across Italy at the weekend including Rome, Naples, Florence, Cagliari and Palermo.
Their slogan is "this city does not show allegiance to the League", which has spread from its former northern heartlands to popularity across Italy, becoming the country's top party.
On Thursday the movement announced 10 new rallies, starting in Sorrento near Naples Thursday evening.
At the weekend other rallies are planned, they confirmed, on Friday in Palermo, and on Saturday in Reggio Emilia and Perugia, and on Sunday in Rimini.
Next week the Sardines will be in Parma on Monday, Florence, Naples and Ferrara on Saturday,) and Milan on Sunday December 1.
Sardines leader Mattia Santori told ANSA Thursday that Salvini's formidable social-media narrative machine, the Beast, "is in serious difficulty...they still haven't got a key to read the movement".
If Salvini does turn up to their event in Rimini on Sunday, Santori said, "we will welcome him with silence and indifference, we won't fall into the trap of the loud speakers of populism".
Santori said "we are organising around 15 rallies but we've already had requests for hundreds, also two from abroad, from the Netherlands and Ireland".
"We want to make sure this energy is neither dispersed nor twisted.
"We are asking for a return to serious and respectful politics".