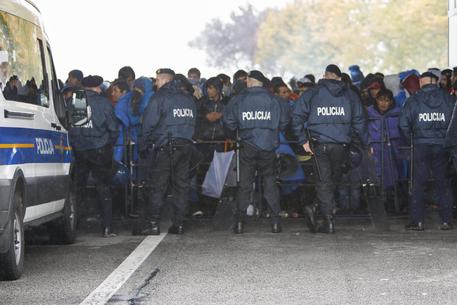 (ANSAmed) - ZAGREB, NOVEMBER 18 - A migrant was seriously injured Saturday afternoon in Croatia when a policeman shot him in the chest in the attempt to prevent a group of people from crossing illegally into Slovenia.
The nationality of the injured migrant has not yet been reported. The incident occurred in a wooded area of the Gorski Kotar region, between Croatia and Slovenia, on one of the routes that many migrant and refugees stuck in Bosnia take to reach Western Europe. Croatian media say that a group of 17 migrants, after being sighted while illegally crossing the woods, allegedly refused to peacefully hand themselves over to the police and began to throw rocks and other objects at the security forces. According to the official version given by the police, one policeman tripped while shooting in the air and the bullet ricocheted and hit one of the migrants. The Croatian police immediately gave first aid to the injured man and took him on foot for three kilometres to the nearest ambulance. The migrant has been hospitalised and undergone two surgeries. He is still in critical condition. Human rights organisations have expressed serious doubts about the official version of the incident and say that weapons are being used ever more frequently against migrants and have called for the interior ministry to prevent similar incidents.
(ANSAmed).