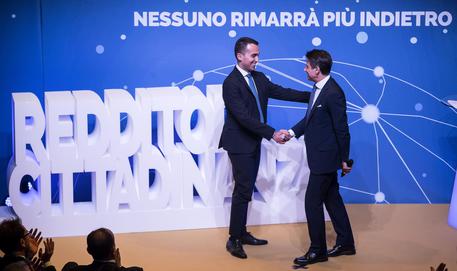 (ANSA) - Rome, January 22 - Deputy Premier and Labour and Industry Minister Luigi Di Maio said Tuesday that the government would make sure the weakest sectors of society are protected if the economy goes into recession. He was speaking at an event with Premier Giuseppe Conte to present the government's new 'citizenship wage' basic income for job seekers.
"If there is ever a recession - I don't know if we'll go into recession - we'll protect the weakest segments of society with the citizenship wage. We won't do what the others before us did," 5-Star Movement leader Di Maio said. The Bank of Italy and the IMF have both slashed their GDP growth forecasts for 2019 for Italy to 0.6%, adding to concerns that the economy could be at risk of a new recession. Di Maio said soon-to-be-introduced benefit of up to 780 euros will not make it possible for people to "stay on the couch" but will help the jobless get into the world of work.
He said the benefit will be withdrawn if a recipient refuses three job offers. He added that it will not be possible to use the card with 'citizenship wage' funds for gambling. The new benefit will be available to people who are not currently eligible for unemployment benefit, such as formerly self-employed people who are out of work and young people who have never had a proper job.
"I presented myself as the lawyer of the people (when I was sworn-in as premier)," said former law professor Conte.
"Today I present myself as the guardian of a new social pact between citizens and the State.
"We want all the citizens to be able to be part of it.
"The basic income will be a cornerstone and I will watch over with all the instruments available to make sure this project is not marred by craftiness and abuses". The basic income was the key pledge of the M5S before last year's general election.
The government is also bringing in a pension reform, the 'quota 100' plan, that will bring down the retirement age for some people.
This was a key pledge for the M5S's coalition partner, Deputy Premier and Interior Minister Matteo Salvini's League party.