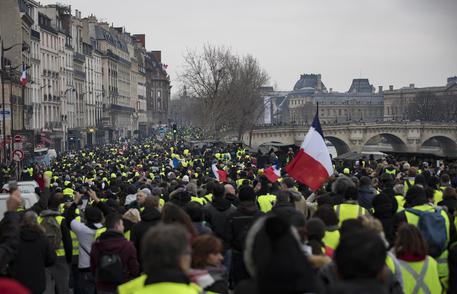 (ANSA) - Rome, January 7 -Deputy Premiers Luigi Di Maio and Matteo Salvini said Monday that they were backing the Yellow Vests (Gilets Jaunes) protest movement in France.
"Yellow vests, don't give up!" read a post by Labour and Industry Minister Di Maio on the blog of his 5-Star Movement (M5S).
"The 5-Star Movement is ready to give you the support you need.
"Like you, we too strongly condemn those who caused violence during the demonstrations, but we are well aware of the fact that your movement is peaceful.
"We can make some of the functions of our operating system for direct democracy, Rousseau, available to you".
Interior Minister Matteo Salvini expressed support for the yellow vests while condemning the violence that has marred some of its demonstrations.
"I support the good citizens who are protesting against a president who governs against his people but I absolutely, totally and firmly condemn every episode of violence, which is no use to anyone," Salvini said.
French European Affairs Minister Nathalie Loiseau responded to the statements of support for the Yellow Jackets from the deputy premiers by saying that "France stays well clear of giving Italy lectures. Salvini and Di Maio should learn to clean up their own house".