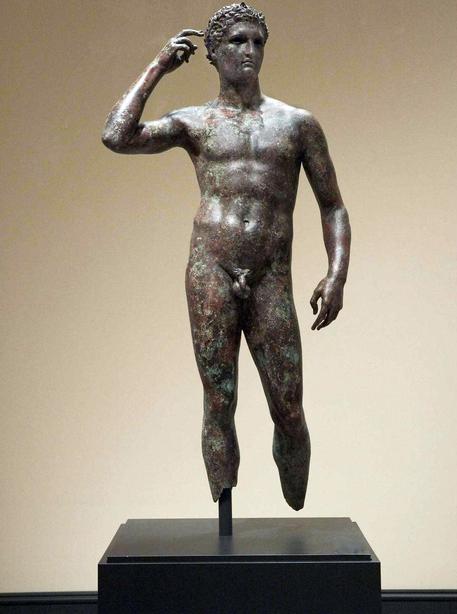 (ANSA) - Ancona, December 4 - The ancient Greek Statue of a Victorious Youth by fabled sculptor Lysippos belongs to Italy, the supreme Cassation Court said Tuesday, saying the Getty Museum in California must hand it back.
The top court rejected an appeal by the US museum against a Pesaro judge's order to confiscate the fourth-century BC bronze statue.
"The Lysippos (as it is known in Italy) must return to Italy, it's the last word from Italian justice," Pesaro prosecutor Silvia Cecchi told ANSA after the long legal battle.
Culture Minister Alberto Bonisoli told ANSA "now we hope the US authorities will act as soon as possible to favour the restitution of the Lysippos to Italy".
He said he was happy that "this judicial process has finally ended and the right to recover an extremely important testimony of our heritage has been recognised.
"Let's hope the statue can soon return to be admired in our museums".
But the Getty said in a statement that "we will continue to defend our right to the Lysippos.
"The law and the facts do not justify the restitution to the Italian government of a sculpture that has been exhibited to the public in Los Angeles for almost half a century". In June the Pesaro prosecutors announced that the order issued to seize the statue for years disputed by Italy and the Getty Museum in Malibu was "immediately executive".
"The Lysippos statue must return to Italy," prosecutors told ANSA, accompanied by Tristano Tonnini, the lawyer for the association "Cento Citta'", which has been fighting the legal battle for 11 years.
"We expect politicians to play their part," they said.
The Italian judge rejected an appeal by the Getty Museum, ruling that the fourth-century BC Greek statue - known as Lysippos or Lysippus after its creator and fished out of the sea off Pesaro in 1964 - must be seized wherever in the world it is.
Commonly referred to as the Getty Bronze and formally named Statue of a Victorious Youth, the statue is one of the best-known works in the Los Angeles-based museum.
The Lysippos has been contested ever since the Getty bought it for almost four million dollars in 1977 from German art dealer Herman Heinz Herzer, paying nearly 800 times the $5,600 that Italian dealers paid the fishermen for it in 1964.
Italy has long claimed the statue was smuggled out of the country and has demanded that the Getty hand it back.
Lawyer Tonnini said he was satisfied by the judge's ruling, but said he is also convinced that "the California museum always knew that it was buying a smuggled and illegally exported artifact".
Pesaro prosecutor Cristina Tedeschini said she expected a favourable ruling from the Court of Cassation.
"But the fact is that three different judges have reaffirmed that the statue belongs to the Italian state and that it must be given back," Tedeschini said.
In November 2007, a court in Fano, near Pesaro, cleared the Getty Museum of wrongdoing in the case.
But prosecutor Silvia Cecchi said the judge "affirmed that the statue was taken in Italian national waters and therefore belongs to Italy," which has been the sustained argument since 2007 to get the statue back.
"It must be very clear that the order is immediately executive and we will apply this principle by notifying the American authorities," Cecchi said.
The Getty said it would lodge an appeal at the Cassation Court to "defend our rights".