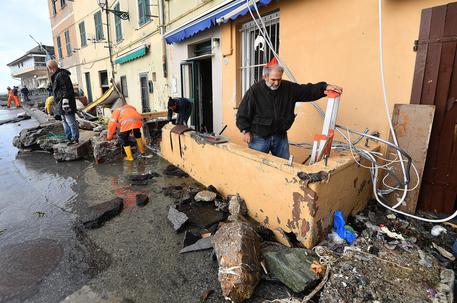 (ANSA) - Rome, October 30 - The death toll of the wave of extreme weather that is lashing Italy climbed to 11 on Tuesday, sources said - as it emerged that St Mark's basilica in Venice had been damaged by acqua alta on Monday.
A man was found dead near Belluno, bringing to 11 the toll from the storms that have swept Italy since Sunday.
Ennio Piccoli, 61, was found dead in the river Blois, near where his car had been found earlier.
Four more victims were registered early on Tuesday after the gale-force winds and torrential rain claimed six lives on Monday. A woman was killed by flood waters at Dimaro, a volunteer firefighter was hit by a falling tree during an operation at San Martino in Badia, in Alto Adige, a 63-year-old kite-surfer was thrown against rocks at Cattolica and the body of a fisherman was found by firefighters in Lake Levico in Trentino. The fisherman is said to have gone out to check on his boat and is likely to have been blown into to the lake by the winds. Schools in many cities are closed again on Tuesday.
Falling trees the cause of many of the deaths and of major disruption. The body of a man believed to be an immigrant of about 50 was found on the beach at Bacoli near Naples Tuesday.
He is believed to have been swept into the sea by Monday's violent thunderstorms, drowned, and washed up on the beach, sources aid.
But this has yet to be confirmed by an autopsy, and he is not among the storm death toll.
Liguria has been brought to its knees by the storms and a third of its olive crop has been lost.
Civil Protection chief Angelo Borrelli surveyed the damage from a helicopter.
Also in Liguria, violent waves and winds broke very many large luxury yachts away from their berths and slammed them into the coastline at the private Carlo Riva Marina at Rapallo, near Genoa.
Of the 390 yachts in the marina, half were destroyed, marina director Marina Scarpino said.
"Ten-metre-high waves struck the rocks for hours and their force broke the storm barrier for 300 metres.
"After the collapse in 2000, because of another freak wave, we had rebuilt the dam higher by 1.30 metres taking it up to 6.5 metres.
"But it was not enough with this exceptional event".
In Venice, St Mark's Basilica was damaged by Monday's exceptionally high acqua alta in the lagoon city, the First Procurator of St Mark's, Carlo Alberto Tesserin, said on Tuesday.
The high water submerged some tens of square metres of the thousand-year-old marble mosaic floor opposite the altar of the Madonna Nicopeia and completely inundated the Baptistery and the Zen Chapel, he said.
The water reached a depth of 90 centimetres above the mosaic flooring of the Nartece, washing up against the monumental Byzantine doors, the columns and the marbles, he said.