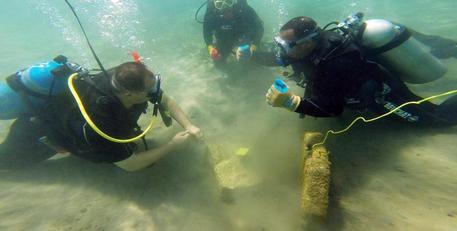 (ANSAmed) - AMMAN, FEBRUARY 27 - Archeologists have uncovered ancient marine port on the Red Sea city of Aqaba, dating back more than 1000 years during the Islamic era that extended from 650-1116 AD, officials said today.
Officials in charge of the project said the site includes additional features such as a furnace for the production of pottery, and spaces for the maintenance and manufacture of ships and sails among other facilities.
Work is under way to identify the extent of the activity of the port of Ayla, which links the commercial road from the Levant, Hijaz, Egypt and the Maghreb with the maritime navigational route that reaches India, east and south Asia and Africa," said Ehab Eid, JREDS' executive director.
The finding is expected to further boost the reputation of Aqaba as a centre trade station in the region and could spark an added interest from tourists, said officials from Aqaba Special Economic Zone Authorities. The Royal Marine Conservation Society of Jordan (JREDS) took charge of the project in association with USAID-funded project "Sustainable Cultural Heritage Through Engagement of Local Communities", and in cooperation with the Department of Antiquities. Jordan hopes to turn Aqaba into a regional tourism and trade centre, attracting billions of dollars of investment in infrastructure projects to build a vibrant city on shores of the Red Sea. (ANSAmed).