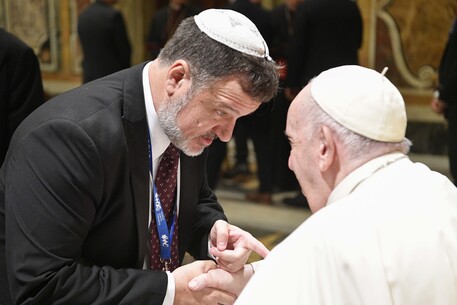 (ANSA) - ROME, NOV 22 - We must stop the "sacrilegious" war in Ukraine, Pope Francis told the World Jewish Congress Tuesday.
Addressing a delegation from the World Jewish Congress (WJC), Francis said the shared religious heritage of Jews and Christians should be an incentive to act together for fraternity and peace in a broken world, Vatican News reported.
He referred again, in particular, to the "great sacrilegious war" waging on in Ukraine, which, he noted ,"threatens Jews and Christians alike, depriving them of their loved ones, their homes, their property and their very lives!" Welcoming 200 members of the Executive Committee of the World Jewish Congress (WJC) lead by its President Ronald S. Lauder, on Tuesday, Pope Francis said the common religious heritage of Jews and Christians should be seen as an "incentive to act together" for a more fraternal and peaceful world.
In his address the Pope recalled that from the Second Vatican Council, the organization has been in dialogue with the Commission for Religious Relations with the Jews, and noted that their visit "testifies to and strengthens the bonds of friendship" between the Holy See and the Jewish communities.
He noted that Jews and Christians, not only profess faith in the one Maker of heaven and earth, who created every human being in His own image and likeness, and has revealed Himself to humanity, but also "share a similar outlook on the final things, shaped by trust that on the journey of life we are not advancing towards nothingness, but towards an encounter with the Most High who cares for us". "While there may be different conceptions in Judaism and Christianity about how this fulfilment will come about, the consoling promise that we share remains", he said.
The religious heritage that Christians and Jews share should, therefore be, regarded as "an incentive to act together" to " make the world more fraternal, combatting forms of inequality and promoting greater justice, so that peace will not remain an otherworldly promise, but become a present reality in our world.
"Common and concrete initiatives aimed at promoting justice call for courage, cooperation and creativity", Pope Francis further noted.
As the world continues to be marred by war, which he reiterated is a "defeat for all humanity", the Pope hence called for a joint effort to pave the way for peace. (ANSA).