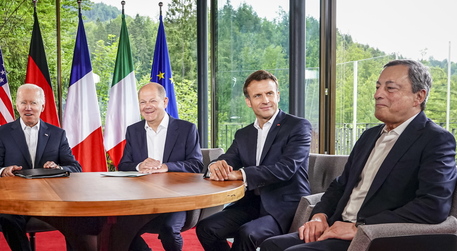 (ANSA) - ROME, JUN 28 - This week's Group of Seven summit was a great success because it showed unity and cohesion on helping Ukraine defend itself from the Russian invasion, Italian Premier Mario Draghi told a press conference Tuesday, stressing his hope that there would now be a deal on a Russian gas price cap before the October date he extracted from EU leaders last week for viewing a report on the issue.
"This G7 has really been a success, our countries have reaffirmed their full and great cohesion, great unity of views in particular on the war in Ukraine and its consequences," he said.
He told the press conference at the summit venue, Elamu Castle in Germany, that the G7 would do whatever it takes to help Kyiv repel Moscow's aggression.
Draghi added that UN Secretary-General Antonio Guterres said "we are near the moment of truth" on the Ukraine grain crisis to see if Ukraine and Russia want to make a deal on letting grain out of the ports.
"The situation must be swiftly unblocked in order to put the new crops into grain silos," said Draghi.
He said it was not necessary to de-mine Ukrainian ports but to create safe corridors for grain shipments.
Draghi also said the EU would "accelerate" on Italy's request to put a cap on Russian gas prices.
"All the leaders agree on the need to limit funding for (Russian President Vladimir) Putin, but also to remove the causes of inflation. We gave an urgent mandate to the ministers on how to apply a price cap on gas and oil. The EU will hasten its work on the gas price cap, a decision we welcome".
He said he hoped for a "result" on the price cap before the EU is scheduled to view a report on it in October.
It is difficult to say Putin will do with Russia's gas and "we must be prepared," said the Italian premier.
Italy has already cut its reliance on Russian gas from 40% to 25% of its total supplies with a string of deals with other countries.
Draghi added that Putin would not attend the upcoming G20 meeting personally but might intervene remotely.
Draghi said the Russian invasion had not gone as Putin had expected due to western firmness.
"Countries are seeking protection and re-armament. Things have not gone as Putin would have liked".
"NATO has enlarged and is stronger", he said, referring to the likely membership of Sweden and Finland, adding that "the EU is more united too".
However, he said, "the constant progress of Russian forces" in eastern Ukraine "is concerning". (ANSA).