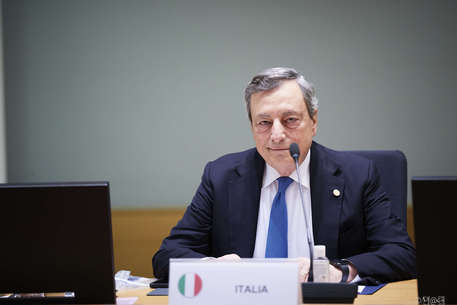 (ANSA) - ROME, OCT 22 - Premier Mario Draghi told a press conference after the EU summit Friday that Italy was very satisified with the final declaration on migrants, that it had stressed the importance of setting up strategic energy stocks, and that the rules were clear on the legal spat that has seen rising tensions between the EU and Poland.
He said Italy had stressed the importance of immediately setting up strategic energy stocks for all EU countries at the meeting.
"We were explicit on the need to immediately prepare an integrated stock of strategic reserves," he told the reporters present.
"We must protect all the EU countries in equal measure".
The premier added that it would be difficult to immediately give up gas supplies in favour of renewable energy.
"In the long term we must bank on the strategy of renewables, But if gas prices rise you have the problem of financing this process. And it is hard for many countries to immediately give up gas ".
Draghi reiterated: "the arrival point is clear, and can only be renewables".
On Poland's law primacy dispute with the EU, Draghi said "there no alternatives, the rules are clear. The secondary law of the EU has not been called into question, but the primary law, the treaty. So there are no alternatives, the rules are clear on this. Having said that, it is also clear that you have to keep the path of dialogue open".
The Polish high court recently sparked a row with the European Commission by ruling that national law had primacy over EU law.
This was in the wake of EU moves on Poland's rule of law breaches.
Draghi also said there was "no doubt" in the EU about Italy's pro-European stance.
On the controversial call by several border countries to have the EU fund border walls against migrants, Draghi said "it's not true"that there had been an opening by the EU. He said "the Commission does not agree and at the European Council many countries do not agree, including us".
EC chief Ursula von der Leyen, for her part, told the press "I have been very clear: there will be no funding for barbed wire and walls".
On the migrant issue in general, Draghi said "I am very satisfied with how the discussion ended on these issues. The original text only spoke of secondary movements without citing the balance between solidarity and responsibility. The present text introduced this concept".
He added: "the most important legal framework on which we must make progress is the Migration and Asylum Pact" He said the discussion on border barriers had "strangely" led to "an opening on discussing" the Pact, a discussion which has been "at a standstill for a year".
Draghi also spoke about the revision of the EU's Stability and Growth Pact, saying "we have a year to discuss it" and "there is time to attain realistic viewpoints.
"The commitments we are taking on vaccinations, on health to address future pandemics, on vaccinations in the rest of the world, are of such a scale that they must be addressed with different budget rules," he said.
"We have a year to talk about it in a realistic way".
Draghi also said there was "no delay" in Italy's post-COVID National Recovery and Resilience Plan (NRRP), which has been funded with almost 200 billion euros of EU money in grants and low-interest loans.
He said that a decree was in the pipeline to remove obstacles to the implementation of the NRRP.
On the domestic front, he said the 'quota 100' pension system allowing for early retirement if the sum of age and years worked reached 100 had "lasted for three years" and would be scrapped.
On the COVID pandemic in Italy, Draghi said a third vaccine dose was needed, especially for some categories like the elderly and the most vulnerable. "This will be done," he said. (ANSA).