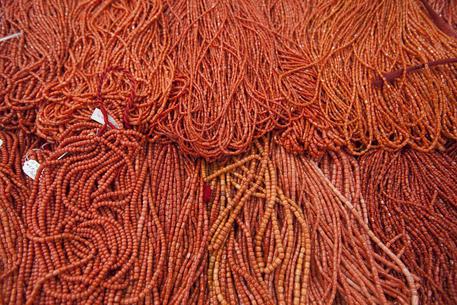 (ANSA) - ROME, JUN 10 - Doriano Belloni began exploring the turquoise waters off the Italian island of Sardinia when he was a child.
Searching for coral soon became his passion - and his livelihood. Now 70 years old, he still dives every summer in search of one of the Mediterranean's gems, the spectacular red coral which is sought by buyers in Italy and abroad.
He is the first to admit the need to protect red coral for the future.
"With this job, we have to live; we have to support our families," Doriano says. "It is in our interest to ensure the resources continue to exist. So we don't destroy the coral." Red coral has been a precious commodity since prehistoric times.
Traces of this colorful organism have been found at archaeological sites across Europe, and it has adorned religious art, sculptures, ornaments and jewellery for centuries. It can be found in shades ranging from pale pink to deep red and top quality coral sells for up to USD 6 000 (EUR 5 000) per kilogramme.
Some precious coral species, including red coral, are now recognised as vulnerable because of a range of pressures, including rising sea temperatures, water pollution as well as uncontrolled harvest. Together with a changing climate, these issues threaten the long-term survival of red coral and many other aquatic species in our increasingly vulnerable seas and ocean.
Covering over 70 percent of the planet, our ocean supports humanity and all organisms on earth. It produces at least 50 percent of the planet's oxygen and is home to most of earth's biodiversity. Not to mention, that 1 in 10 people in the world depends on fisheries and aquaculture for their livelihoods.
The Mediterranean is just one of the regions where FAO is supporting countries to sustainably manage and protect marine environments, while counteracting overfishing of coral, fish and other species.
Through the regional General Fisheries Commission for the Mediterranean (GFCM), FAO is working with Italy and other countries to improve control and surveillance of fishing while seeking to keep red coral harvesting at sustainable levels. The management measures adopted by the GFCM are designed to ensure the sustainability of red coral fishing, the job viability of the fishers, artisans and others in the industry who depend on it.
"This is not just about the communities who fish for coral; there are generations of people connected to the fishing, processing and trading of corals. We have to support these communities so this is sustainable long into the future," says Kim Friedman, Senior Fishery Resources Officer at FAO.
While assisting all Mediterranean and Black Sea countries with improving their fisheries management capacity and making decisions favouring sustainability, the GFCM is also launching a series of research programmes, including one on red coral, as a means of gathering information on priority species and providing managers with advice. "Red coral is part of an ecosystem, the flow of people and traditions, how the fishers work, how the stock responds to fishing, how the divers operate and how the consumers get their treasured product," says Friedman.
"We can't afford to just work on the market or on the natural resource. We have to develop a broad focus on how to manage this sustainably." The Italian Government has already taken the initiative. In 2019, following recommendations by the GFCM, Italy introduced a new law specifying where and when the collection of red coral is allowed, daily extraction limits and the ports from where red coral can be landed. Fishers are already seeing the results as coral reefs are regenerating in the Mediterranean.
"Corallini" Much of the coral harvested in Sardinia ends up in Torre del Greco, a small town south of Naples. Here coral production is embedded in the town's identity and residents were once dubbed 'corallini' because of their pursuit of coral. Generations have built their livelihoods on producing coral jewellery and cameos here since the 17th century.
The town's Istituto Superiore Francesco Degni is one of the only schools in the world that teaches young men and women how to transform raw coral into elegant jewellery and art pieces.
"Torre del Greco has always based its economy on coral," says Ciro Mazza, one of the school's teachers.
"Most [students] come from families that have coral and the traditional cameo in their DNA." Assocoral is an industry association that represents Italian artisans and merchants and works to raise awareness for the protection and promotion of coral. It is one of the organizations that has been working with FAO, the GFCM and the Italian government to improve the management of coral fishing across the Mediterranean. The organization is also seeking World Heritage cultural recognition from UNESCO for Torre Del Greco's coral production.
Vincenzo Aucella, president of the association says, "Sustainability is not an additional consideration but the foundation. It is the primary element, not only in coral processing, but in any type of work." At the University of Cagliari, researchers are working with fishers and others in the sector to study coral forests, how they recover from fishing and their impact on other species.
According to Alessandro Cau, Assistant Professor of Marine Ecology at the University of Cagliari, current data confirms that coral fishing in Italy is sustainable. He believes that Sardinia sets a fine example for building a unified management plan across the Mediterranean.
Red coral is just one of the many precious resources in our marine environments, valuable not only for the health of ecosystems but for the people who depend on it for their livelihoods. Through the adoption of good practices and collaboration with key players in the fisheries sector, FAO aims to preserve both our marine resources and the livelihoods they sustain.
Note: Story reproduced courtesy of FAO. (ANSA).