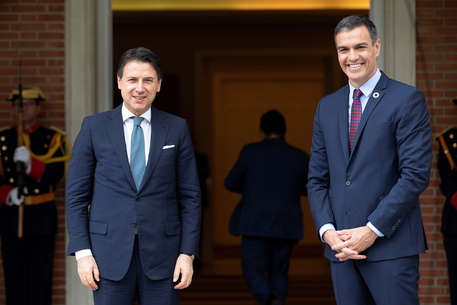 (ANSA) - ROME, JUL 8 - Premier Giuseppe Conte said at a press conference with Premier Pedro Sanchez in Madrid Wednesday that the two countries agreed a Recovery Fund deal must be found by the EU by the end of this month.
The two leaders also said the COVID emergency has united Italy and Spain more than ever.
Conte stressed that Madrid was the second stage, after Lisbon, of his tour of EU capitals to drum up support for a Recovery Fund deal.
He said the trip "has boosted our conviction that we must work in harmony".
Conte said "we must finalise the package of EU measures by the end of July" He said there should be "no giving way" on the European Commission's initial proposal of a 750 billion euro fund to come more in grants than loans.
Conte said an "elevated" response was needed from the EU, and not a "compromise among the 27".
The Italian PM said "we have to dare, we must not be indulgent".
"The single market is at stake here, unless we find a deal we will destroy it".
Sanchez, too, told the press conference that the EU must reach a deal on the COVID emergency Recovery Fund by the end of this month.
"We need a joint response from Europe," he said alongside Conte.
"There can be no other moment for the accord than beyond this month".
Conte is continuing to firm up Spanish and Portuguese support for Italy's stance on the EU's planned Recovery Fund, after flying from Lisbon to Madrid.
Political sources said there was full agreement between the three countries that there should be a swift European response, with a deal by the end of this month.
Italy, Spain and Portugal also agree that most of the funds must come in grants rather than loans, according to the European Commission's original 750 billion euro proposal.
Northern European countries, on the other hand, are pushing for more loans than grants and have said there is no great hurry for an agreement.
On Tuesday Conte stressed the need for a reaction to the COVID crisis, which risks destroying the single market, saying "if some countries have greater difficulty, all the others will suffer as a consequence".
Sanchez said an agreement on the Fund could and must be reached, in an interview with Corriere della Sera newspaper Wednesday.
Sanchez spoke of a pact for Europe between Italy and Spain.
He added that Madrid for now has adequate access to credit and will therefore not resort to the European Stability Mechanism bailout fund.
Italy, too, has been cautious about using the ESM, with some in government saying that a no strings attached promise may not turn out to be accurate Conte, for his part, has said it is up to parliament to decide whether Rome should tap into the ESM for COVID-related spending.
Sanchez said in Madrid Wednesday, however, that "we must not be ashamed to use the ESM".
Conte said that proposals on using the ESM should be examined after the end of EU negotiations.
He said it was "ideological" to say at the current stage whether the ESM should be used or not.
German Chancellor Angela Merkel, for her part, said that a deal on the Recovery Fund must be reached by the end of the summer.
Economy Minister Roberto Gualtieri, for his part, told a Bloomberg online forum that Italy would only use state intervention when necessary and it had shown a courageous response to the health emergency.
Gualtieri said Italy would use the ESM if necessary, saying there was no stigma attached.
Austrian Chancellor Sebastian Kurz met with other 'frugal' leaders from Denmark, the Netherlands and Sweden in a videoconference Wednesday and said they had coordinated their stance on the Recovery Fund.
He said he was looking forward to meeting them again in person in Brussels at a July 17 summit.
The four countries are leading a push for funding to be handed over as loans with strings attached, such as structural reforms.
(ANSA).