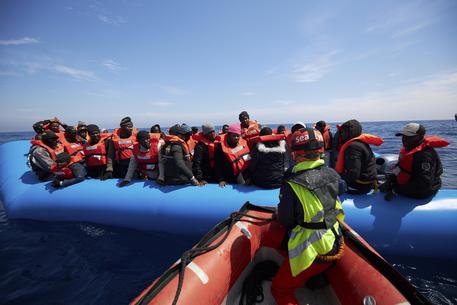 (ANSA) - Rome, April 15 - Some 800,000 migrants are set to invade Italy from conflict-torn Libya, Premier Fayez al-Sarraj told Corriere della Sera Monday.
"Do something quickly," he said, "the worsening of the situation in Libya could push 800,000 migrants and Libyans to invade Italy and Europe".
Among them, he said, were criminals and, above all, jihadists linked to ISIS.
Sarraj thanked Italy for its mediation and support for peace in Libya.
Eastern Libyan strongman General Khalifa Haftar has "betrayed Libya and the international community" with his offensive on the UN-backed government in Tripoli, Sarraj said.
"We need Rome and the EU to be united and firm in blocking Haftar's war of aggression," he told journalists.
"I thank Italy for keeping its embassy open, for keeping the Misrata field camp and for the political support that the Conte government is offering us.
"We are faced with an aggression that might spread its cancer in all the Mediterranean".
Ghassan Salamé, the UN's special envoy for Libya, on Monday accused General Haftar of conducting a coup attempt.
He denied that it was an anti-terrorism operation in speaking to the BBC.
Dozens have been killed in the fighting since the general ordered his Libyan National Army forces to advance on Tripoli, where the UN-backed Government of National Accord is located.
Interior Minister and League leader Matteo Salvini said "there are those who are playing at war for their interests".
He said that western powers should remember the lessons of the past.
Salvini has criticised France for its alleged support for Haftar.
Premier Giuseppe Conte met Qatari Deputy Premier Mohammed bin Abdulrahman Al-Thani to discuss the Libya crisis in Rome Monday.
Foreign Minister Enzo Moavero Milanesi met Libyan Deputy Premier Ahmed Maitig. Conte said "we must stop this conflict continuing. I will do my utmost to make sure all the Libyan actors work with us for a peaceful solution".
The toll from the fighting between forces loyal to Haftar and the UN-backed government in Tripoli rose to 147 dead and 614 injured with 18,000 displaced Monday.
Salvini is once more under investigation for kidnapping migrants, the minister himself said Monday.
Salvini said he is being probed for allegedly abducting migrants allegedly held on a ship stopped from landing in Siracusa from January 24 to 30 this year.
Salvini said the prosecutor in the case, Carmelo Zuccaro, had filed to dismiss the case at the same time as he had submitted the charges.
Earlier this year the Senate voted not to lift Salvini's parliamentary immunity to face charges in another alleged migrant kidnapping case.
Salvini took the opportunity Monday to respond to fellow Deputy Premier Luigi Di Maio who on Sunday said Italy's blockade of ports to NGO migrant rescue ships was "only temporary", sources said.
Salvini said "I take the opportunity to reply to the minister: for me the ports will remain closed", reiterating his long-held stance.
He said "I respect the work of the colleague Di Maio who is dealing with jobs, but on the issues of the control of borders and organised crime it's me who decides.
"If minister Di Maio or (Defence Minister Elisabetta) Trenta think differently they should say so in cabinet and we'll have a frank discussion.
"With me the ports will remain unavailably closed and sealed to the traffickers in human beings".
Sources at Di Maio's 5-Star Movement (M5S) said "the interior minister's position is curious. When he fears being tried, he says we do things together, and when he is in an electoral campaign he says he decides about ports on his own." Di Maio said "I'm not interested in rows, I don't want to cause a row, it's bad for the country.
"My only aim is to protect Italy, its companies and prevent another migratory emergency"".
At the weekend Di Maio and Trenta both warned of the prospect of a surge in migrants leaving Libya because of the conflict there.
Trenta had said that "with the war in Libya, migrants become refugees".
Trenta on Monday offered to explain international law that means that "those fleeing Libya today are refugees" to the League and far-right movements who have criticised her.
"I see that today the League and some far-right movements have attacked your truly," she said.
"I can invite them all to me, to the ministry, so I can explain to them a bit of international law and so they can perhaps understand what their aggressive tomes on Libya can produce," she said.
Rome prosecutors said last month there are "elements to posit" kidnapping charges in the case of the SeaWatch 3 migrant rescue ship which had to wait 12 days off Siracusa before getting the OK to land at Catania on January 31.
German NGO SeaWatch said it was "happy" that the "ordeal" of the 47 migrants on board the Dutch-flagged ship was over after six EU countries agreed to take them.
The Rome prosecutors sent their case file on to Siracusa colleagues who then handed the case to the Catania ministers tribunal.
The Senate recently voted not to let kidnapping charges proceed against Salvini in another migrant rescue standoff with the EU last August.
In that case, Salvini kept 177 migrants on board coast guard ship Diciotti for two weeks until Albania, Ireland and the Italian Church agreed to take them in.
Salvini recently said on the SeaWatch case: "is there another trial against baddy Salvini on the way? Salvini last year closed Italian ports to NGO migrant rescue ships.