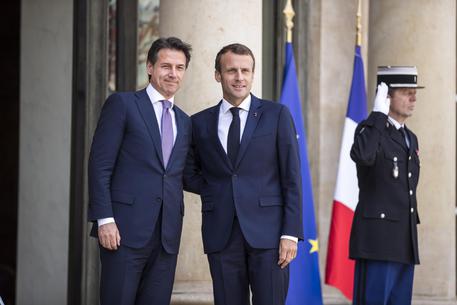 (ANSA) - Paris, June 15 - French President Emmanuel Macron and Italian Premier Giuseppe Conte on Friday reached agreement on issues including migrants and the euro.
The Paris talks sealed peace after friction over the Aquarius migrant ship.
Conte told a press conference that that he had "cleared things up" with Macron and the two countries had "managed a difficult moment".
"The exchange we had made it possible to agree on several issues," Macron.
"Cooperation between our countries is indispensable, especially on immigration and the eurozone".
Conte said they had agreed that "we must turn the page on migrants" after he proposed setting up hotspots in countries of origin and transit including Libya, Niger and other sub-Saharan nations.
Conte said that "no one in Europe can wash their hands of the migrant crisis".
An EU-wide rather than a national response to the migrant crisis is needed, Macron said.
"France, as well as Italy, must manage this migrant crisis and we must give responses together," he said.
"We must adopt European responses, there cannot be national responses". Macron said that "Italy has had massive migrant arrivals, but in the last year we have reduced them by 77%. "France does not benefit from this situation. "If Italy has had 18,000 asylum applications in the first four months of 2018, France has had 26,000". Macron said that "we hope to go forward with our European partners in the coming months on a deep reform of the Dublin rules for better responsibility and burden sharing" on migrants.
He said "the system is not working today...we must find mechanisms that allow solidarity and we must make sure the geographical situation doesn't put us in unsustainable political situations". Conte, who announced an Italo-French summit in Rome this autumn, said that "the Dublin regulation must change: Italy is against and is preparing is own proposal that it looks forward to sharing with the other partners in view of formalising it at the next Austrian EU presidency".
Macron said that "I don't trust these formulas that have never brought much luck in history" referring to the "axis of the willing" proposed by Austria with Germany and Italy to face the migrant crisis.
Conte said that all the EU, not just the proposed axis between Austria, Germany and Italy, should be "willing" to tackle the migrant crisis.
"I'd like an axis of the willing that spans the whole European arc, that's what we aspire to", he said.
While Italy has signalled that other NGO ships may be rejected, Macron said that if a ship was in French waters "we will take charge of it".
On the eurozone, the two leaders agreed that reforms are needed.
Macron said that there was a "clear sharing of views" on the eurozone with Rome.
He stressed the importance of completing banking union to fully stabilise the eurozone" and to have a eurozone budget "for greater investments." Conte said that Italy was favourable to sharing more risks in the eurozone. "We are favourable to a strengthening of the EU's economic governance. "Italy is favourable to reach advances on the mechanisms of risk sharing, we have remained behind on this, being focused above all on the reduction of risks". Finally, to seal the refound peace, Macron said that he "loved" Italy and "hoped for common success".