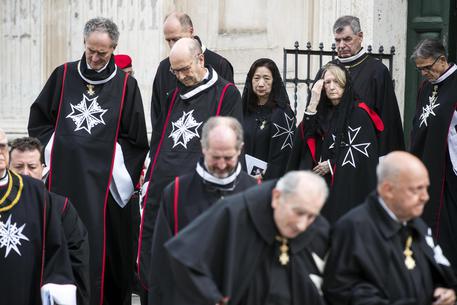 (ANSA) - Rome, May 2 - Fra' Giacomo Dalla Torre del Tempio di Sanguinetto was elected as 80th Grand Master of the Sovereign Order of Malta (the Knights of Malta) on Wednesday. The Order's elective body of 54 members elected him, the order said in a statement. Dalla Torre was elected as head for a year on April 29 last year as Lieutenant Grand Master, and now assumes the lifetime post of Grand Master.
Pope Francis has been informed by letter of the election result.
Fra' Giacomo was born in 1944 in Rome. He graduated in Humanities from the University of Rome, specialising in Christian Archeology and History of Art. He became a member of the Sovereign Order in 1985 and took his Solemn Vows in 1993. From 2008 to April 2017, Fra' Giacomo Dalla Torre held the post of Grand Prior of Rome.
According to the Order's Constitution the Grand Master is the sovereign and religious head of the Order. Elected for life, the Grand Master will be responsible for continuing the reform of the Constitution of the Order of Malta started in 2017, to adapt it to the developments that the Order has experienced in recent decades. The first official engagement of the Grand Master will be to preside over the 60th Order of Malta International Pilgrimage to Lourdes, which will take place from 5 to 8 May.
In January last year Pope Francis accepted the resignation of the then head of the Knights of Malta, Fra' Matthew Festing, after a row over distributing condoms in Myanmar.
The Prince and Grand Master of the Sovereign Military Order of Malta (SMOM), commonly known as the Knights of Malta, went on to present his resignation to its supreme council.
Festing was reportedly asked by the pope to resign in relation to the December 2016 ouster of SMOM grand chancellor, Albrecht Freiherr von Boeselager, over revelations that the order's charity arm had distributed condoms in Myanmar under his watch.
Von Boeselager's dismissal was reportedly backed by the pope's envoy to the order, conservative Cardinal Raymond Burke, against Francis' advice.
Festing had refused to cooperate with a papal commission investigating von Boeselager's removal, and cited the Knights' status as a sovereign entity.
SMOM runs a large charity-hospital organization around the world, and has recently provided humanitarian aid for countless refugees and migrants.
It has diplomatic relations with over 100 states and the European Union, and permanent observer status at the United Nations.
The Knights of Malta, as they are more widely known, were founded on the Mediterranean in the 11th century as a military religious order like the Templars.
They were removed from Malta by Napoleon.
Headquartered in Palazzo Malta in Rome, their mission is summed up in their motto: "Tuitio Fidei et Obsequium Pauperum"; protecting the Catholic Church and serving those in need.