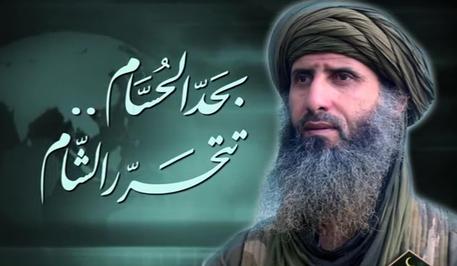 (ANSA) - Rome, January 14 - Abu Yusuf al Anabi, one of the leaders of North African terror group al-Qaeda in the Islamic Maghreb (AQMI), has threatened Italy for allegedly occupying Libya in the wake of the recent agreement for a Libyan government of national unity. "You will regret it," he said in the video message, according to Mauritanian agency al-Akhbar, which says it has received a copy. Italy has agreed to take a key role in helping to stabilise Libya, its former colony, following the UN-brokered deal signed in December by delegates from Libyan factions that had been in conflict.
With the accords signed at Skhirat, in Morocco, Libya "has sold out to foreigners" and Italy has occupied the country and Tripoli, something it "will regret", according to the audio-video message from AQMI.
Anabi defines the agreement on the new Libyan government as a "conspiracy" and attacks Rome: "To the new invaders, grandchildren of (Rodolfo) Graziani (a general who took part in the Libyan war during the Fascist regime), you will bite your hands off, regretting you entered the land of Omar al Mukhtar (hero of the Libyan resistance) and you will come out of it humiliated", the message says.
In the 1920s, Graziani was appointed by the new Fascist government to be commander the Italian forces in Libya. He was responsible for suppressing the Senussi rebellion. During this so-called "pacification", he was responsible for the construction of several concentration camps and labor camps, where thousands of Libyan prisoners died. Some prisoners were killed by hanging, like Mukhtar, or by shooting, but most prisoners died of starvation or disease. His deeds earned him the nickname "the Butcher of Fezzan" among the Arabs, but he was called by the Italians the Pacifier of Libya ('Pacificatore della Libia').
Anabi's message, entitled "Roman Italy has occupied Libya" continued: "We are people who never give up, you will have to walk on our dead bodies. Either we win or we die". The message also referred to "an Italian general who now rules in Tripoli", possibly referring to Gen. Paolo Serra, military advisor to UN special envoy to Libya Martin Kobler.
Anabi is considered one of the most influential leaders of AQIM. The message could not be independently verified.