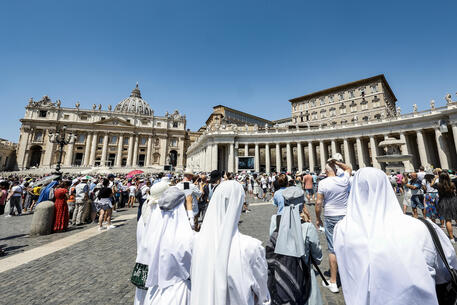 (ANSA) - ROME, JUL 22 - A senior Vatican official has expressed support for the campaign for a global Fossil Fuel Non-Proliferation Treaty as part of the effort to stop the climate crisis spinning out of control.
"The planet already is 1.2°C hotter, yet new fossil fuel projects every day accelerate our race towards the precipice," Cardinal Michael Czerny, prefect of the Dicastery for Promoting Integral Human Development, said Thursday.
"Enough is enough.
"All new exploration and production of coal, oil, and gas must immediately end, and existing production of fossil fuels must be urgently phased out.
"This must be a just transition for impacted workers into environmentally sound alternatives.
"The proposed Fossil Fuel Nonproliferation Treaty holds great promise to complement and enhance the Paris Agreement".
The proposed Fossil Fuel Non-Proliferation Treaty would complement the Paris Agreement by establishing a specific international mechanism to manage a fair and rapid phase out of coal, oil and gas that enables countries to reduce their dependence on fossil fuels, support workers and communities, transition rapidly to renewable energy, and build more diverse economies.
It has been endorsed by many scientists and cities, including London, Paris, Barcelona and Amsterdam, and over 1,300 organizations.
Czerny was speaking at the presentation of Pope Francis's message for the annual World Day of Prayer for the Care of Creation, which is observed by the Catholic Church on September 1.
In the message the pontiff calls for bolder action from all nations during this year's COP27 to implement the Paris Agreement. (ANSA).