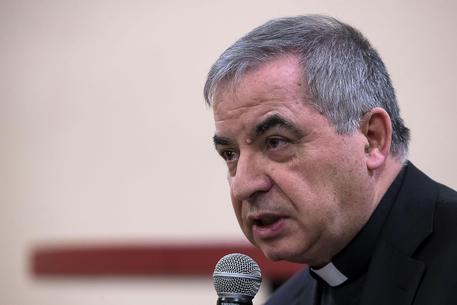 (ANSA) - VATICAN CITY, SEP 1 - Pope Francis told a Spanish Catholic radio station Wednesday he hoped Cardinal Angelo Becciu, the highest-ranked cleric ever to face charges of financial crimes, was innocent of alleged embezzlement in a botched LOndon property deal.
The former close aide of the pope is is among 10 defendants in the trial that started in late July stemming from a loss-making investment in a controversial property deal regarding a building on Sloane Avenue in London.
Becciu, who last year resigned as the Prefect of the Congregation for the Causes of Saints, is accused of embezzlement and abuse of office in relation to alleged wrongdoing when he was the Vatican's Substitute of the Secretariat of State.
Francis told COPE Radio that it was right to try Becciu but "I desire with all my heart that he is innocent".
The pope recalled that "he was an aide of mine and helped me a lot.
"He is a person of whom I have a certain respect as a person, and my desire is that he should emerge well.
"But it is an affectionate way of presuming innocence, after all.
"As well as the presumption of innocence, I can't wait for him to emerge well.
"Now it will be justice that decides." The trial restarts in the Vatican in October.
The pope also told COPE Wednesday that he had never thought of resigning as his predecessor Benedict XVI did in 2013.
He denied a rumour that had started in his native Argentina that he was set to quit last week.
"It has never entered my head" to resign," the pontiff said.
(ANSA).