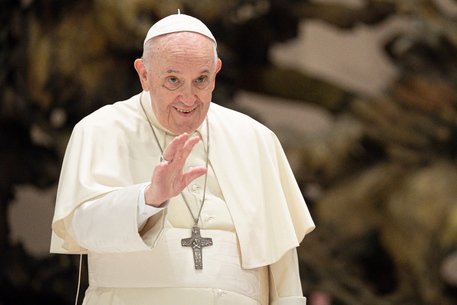 (ANSA) - VATICAN CITY, AUG 26 - Pope Francis on Thursday named the first woman head of a Vatican dicastery or administrative and religious department.
The pope appointed a nun, Sister Alessandra Smerilli, FMA, as the interim Secretary of the Dicastery for Promoting Integral Human Development.
She was also appointed as a delegate of the Vatican Covid-19 Commission, Vatican News reported.
Sister Smerilli was named "to replace Msgr. Bruno Marie Duffé and Fr. Augusto Zampini, respectively Secretary and Assistant Secretary of the same Dicastery, both of whom have returned to their dioceses." The Italian religious sister has served as an Undersecretary at the Dicastery since March 2021.
According to the Holy See Press Office, Pope Francis has "ordered that management team of the Vatican Covid-19 Commission be composed" of Cardinal Peter Kodwo Appiah Turkson, Prefect of the Dicastery, Sister Smerilli, and Father Fabio Baggio, Undersecretary of the Migrants and Refugees Section.
Born in the Italian town of Vasto (Chieti) in 1974, Sister Smerilli has been the Undersecretary of the Dicastery since March 2021, as well as coordinator of the Economic Taskforce of the Vatican Commission Covid-19.
As Secretary she takes the place of Msgr. Bruno-Marie Duffé, who left the Dicastery in July, and as delegate of the Task Force she replaces Father Augusto Zampini. The latter is also leaving the Dicastery and returning to serve in his home diocese in Argentina.
"I am grateful to the Holy Father," said Sr. Smerilli, "for the challenging task he has called me to take on, and I pray the Lord will help me honor this call in a spirit of obedience to the Church, with the humility, passion, creativity and ability to listen that it requires. My desire and commitment are to be able to serve the mission of the Church to the best of my ability, for as long as the Pope sees fit." After thanking her superiors, Sr. Smerilli said she was certain she could "count on the spirit of communion and collaboration of the entire Dicastery, as well as the many international partners who collaborate with the Covid Commission, for the integral promotion of the person and the care of creation by promoting and developing those principles of the Church's social doctrine to which Pope Francis constantly calls us for the construction of a better world." (ANSA).