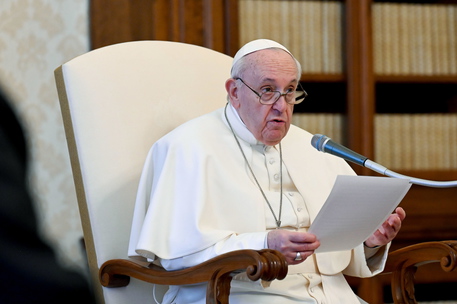 (ANSA) - VATICAN CITY, FEB 4 - Pope Francis on Thursday voiced solidarity with musicians hit by the COVID-19 pandemic.
"My thoughts go out to all those who have been affected: to the musicians, who have seen their lives and professions disrupted by the demands of distancing; to those who have lost their jobs and social contact; to those who have had to cope, in difficult contexts, with the necessary training, education and community life," Francis said in a video message to the 4th International Conference on Music, organised by the Pontifical Council for Culture, in collaboration with the Pontifical Institute of Sacred Music and the Pontifical Liturgical Institute of the Ateneo Sant'Anselmo, Vatican News reported.
He added his hope that "this aspect of social life can also be reborn, that we can return to singing and playing and enjoying music together." Concluding his video message, Pope Francis asked a question, one which he says "comes naturally in the situation in which we find ourselves, caused by the pandemic." "Is the silence we live empty or are we in the process of listening? Is it empty or are we in the process of listening? Will we allow, afterwards, the emergence of a new song?" The Pope also expressed his hope that participants' reflections, on the theme 'Texts and Contexts', "may enrich ecclesial communities and those who work in the field of music, an area that is very important for liturgy and evangelisation." As is well known, noted the Pope, "the Bible has inspired countless musical expressions, including fundamental pages in the history of music." He offered the examples of Gregorian chant, Palestrina, and Bach to stress that "it has inspired a great variety of compositions on the five continents" and that various contemporary composers have also dealt with the sacred texts.
"The Church's musical heritage, in fact, is very varied and has ample space, in addition to the liturgy, for concert performances, in schools and catechesis, and even in the theater," he adds.
The Pope then reflected on the importance of silence in music, saying that "a good musician knows the value of silence, the value of pause." "The alternation between sound and silence is fruitful and allows for listening, which plays a fundamental role in every dialogue," he said.
The common challenge is to listen to each other, he said, noting that in the liturgy "we are invited to listen to the Word of God." Music, too, he added, can help the biblical texts to "speak" in new and different cultural contexts, so that the divine Word can effectively reach minds and hearts. (ANSA).