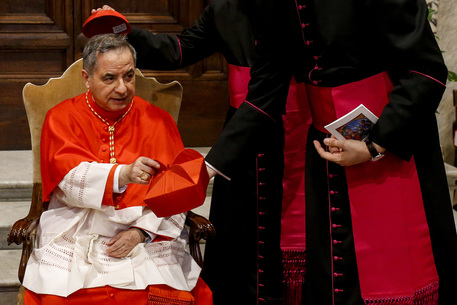 (ANSA) - ROME, SEP 25 - Angelo Becciu defended himself at a press conference on Friday after his shock resignation at the pope's request from a top Vatican post.
The Holy See said Thursday that Pope Francis had accepted Becciu's resignation from office of Prefect of the Congregation for the Causes of Saints and from the rights connected with the Cardinalate.
"It's all surreal," Becciu said.
"Up until yesterday at 6:02 (pm) I felt I was a friend of the pope, the faithful executor of the pope.
"Then the pope told me that he no longer had faith in me because he got a report from magistrates that I committed an act of misappropriation".
The 72-year-old, the former Substitute of the Secretariat of State, has been linked to a London property deal that Vatican prosecutors are investigating.
There is also the case of contracts won by a company specializing in window fixtures linked to his brother in Ozieri, Sardinia.
"Peter's Pence was not used for the London building," he said.
"The Secretariat of State had a fund. It had to grow". (ANSA).