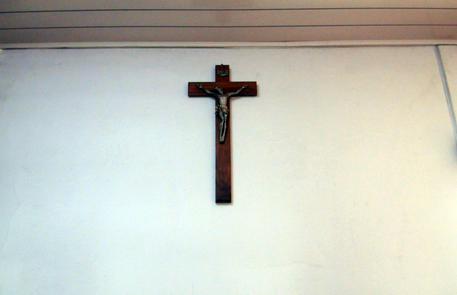 (ANSA) - Rome, October 1 - Education Minister Lorenzo Fioramonti on Monday mooted removing crucifixes from schoolrooms to underline their secular nature, sparking a huge row.
"I believe in a secular school, I think that schools must be secular and allow all cultures to express themselves and not show one symbol in particular," he said.
The idea met stiff opposition from the Catholic Church and from hard-right League leader Matteo Salvini who dubbed Fioramonti "a minister more worthy of anarchist squats than university research".
Fioramonti declined to comment Tuesday saying the row was "sterile".
Msgr Michele Pennisi, archbishop of Monreale near Palermo, said the case was a gift for Salvini who "will use it against the government".
The secretary general of the Italian Bishops Conference (CEI), Msgr Stefano Russo, said Fioramonti's stance had been "rash".
"We need these symbols at the preset time. The crucifix does no harm and does not offend anyone. It absolutely a positive sign", Russo said. The issue of crucifixes in schools, courtrooms and other public spaces has pitted secular and Islamic activists against Catholic traditionalists over recent years.
The most recent ruling from the European Court said that "displaying the crucifix does not injure religious freedom".
The Italian association of atheists welcomed Fioramonti's statement saying "this a good step forwards".