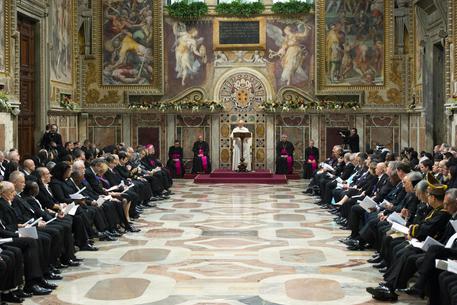 (ANSA) - Vatican City, January 7 - Pope Francis said pedophilia was one of the worst crimes it is possible to commit during an audience with the Diplomatic Corps accredited to the Holy See on Monday. "I cannot refrain from speaking of one of the plagues of our time, which sadly has also involved some members of the clergy," the Argentine pontiff said.
"The abuse of minors is one of the vilest and most heinous crimes conceivable. "Such abuse inexorably sweeps away the best of what human life holds out for innocent children, and causes irreparable and lifelong damage. "The Holy See and the Church as a whole are working to combat and prevent these crimes and their concealment, in order to ascertain the truth of the facts involving ecclesiastics and to render justice to minors who have suffered sexual violence aggravated by the abuse of power and conscience".
The Catholic Church has been hit by a long series of scandals over the sexual abuse of children by members of the clergy and cover-ups of cases of pedophilia.
Some have criticised the pope's response to the problem.