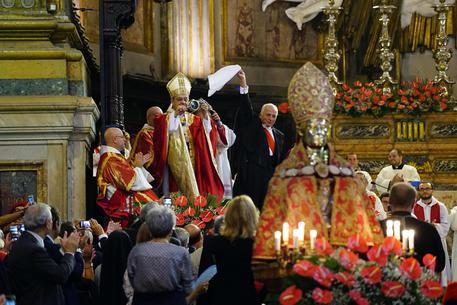 (ANSA) - Naples, September 19 - The 'Miracle' of San Gennaro was repeated on Monday when the blood of Naples' patron saint liquefied at 10:38 Italian time.
A huge crowd of faithful, who had been pouring into the city's cathedral and the square outside from the early hours of the day, greeted the announcement of the miracle recurrence with warm applause. Cardinal Crescenzio Sepe, the Archbishop of Naples, held up a phial containing the blood of the 3rd-century saint while a traditional white handkerchief was waved.
For religious and superstitious Neapolitans, the ritual's success is a good omen for the city.
The miracle takes place on the anniversary of the martyrdom of San Gennaro (St. Januarius) in September 305 AD.
The dried blood of the saint is preserved in two glass phials and traditionally liquefies three times a year, the Church says, thanks to the devotion and prayers of the faithful.
Aside from the anniversary of the saint's beheading, the miracle also takes place on December 16 to commemorate the 1631 eruption of Mt. Vesuvius, believed to have been halted by the saint's intervention, and again on the Saturday before the first Sunday in May.
On this occasion, there is a procession through the city's streets to recall the many times the relics have been moved over the centuries.
The liquefaction process sometimes takes hours, even days, and on occasions fails to happen at all.
When the miracle does not occur it is seen as a sign of impending disaster.
In fact, disaster has struck on at least five occasions when the blood failed to liquefy, including in 1527 when tens of thousands of people died from the plague and in 1980 when 3,000 people were killed in an earthquake which devastated much of southern Italy.
The phials will remain on view in the cathedral for several days before being returned to a vault in the chapel of the cathedral's treasury.
The first historical reference to the liquefaction of the martyr's blood is dated 1389.
Although now a headline-making saint, little is known about San Gennaro except that he was bishop of Benevento to the south of Naples and was martyred during the persecution of Christians spearheaded by the Roman Emperor Diocletian.
The bishop was beheaded for refusing to bow down to his 'pagan' persecutors.
According to legend, his body and head, still dripping blood, were gathered up by an old man and taken to a safe place while a local woman filled a phial with his spilt blood.
A group of Italian scientists has analysed the contents of the phials, establishing that they do contain blood, but have been unable to explain the phenomenon.
Some sceptics believe it is due to the shaking of the containers or the penetration of warmth from the holder's hands.
Si e' ripetuto a Napoli il prodigio del miracolo di San Gennaro.
L'annuncio della liquefazione del sangue, dato alle 10:38 dal card. Crescenzio Sepe, è stato accolto da un lungo applauso dei fedeli che affollano il Duomo di Napoli dalle prime ore della mattina. Il ripetersi del miracolo e' letto come un buon auspicio per la città di Napoli e per l'intera regione Campania.
Il miracolo avviene tre volte: il 19 settembre, nel giorno appunto di San Gennaro, nel sabato che precede la prima domenica di maggio e a dicembre