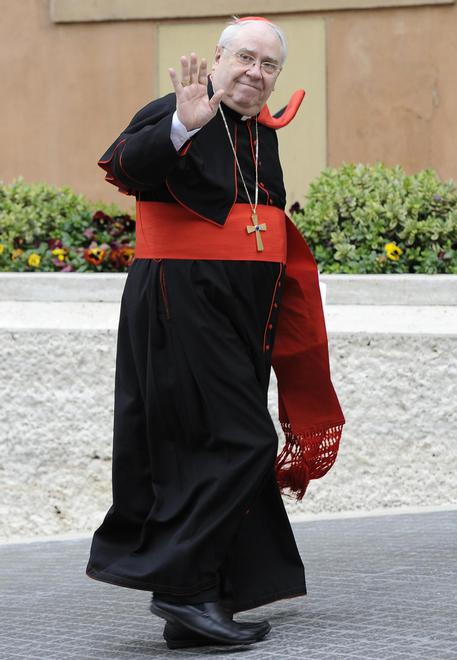 (ANSA) - Savona, May 17 - Cardinal Domenico Calcagno, the former bishop of the northern city of Savona and the current president of the Administration of the Patrimony of the Apostolic See, is under investigation for alleged involvement in embezzlement relating the management of an institute to support the clergy in Liguria, according to press reports on Tuesday.
Prosecutors suspect Calcagno endorsed a strategy used by the institute's former president Don Pietro Tartarotti (up to 2014) and his deputy Gianmichele Baldi (up to October 2013), Il Secolo XIX and La Stampa report.
Tartarotti and Baldi are reportedly being probed for alleged embezzlement.
Prosecutors are reportedly investigating real-estate investments that allegedly caused debts of a ''few million euros''.
Among the operations being probed is an investment in a large structure on the coast of Celle Ligure, called 'Colonie Bergamasche', which was meant to have been turned into a residential complex and luxury hotel.
Calcagno's successor in Savona, Bishop Vittorio Lupi, put the institute into the hands of administrators after Tartarotti and Baldi resigned. Calcagno said Tuesday that he was not worried about being probed as he did nothing wrong. "I learned from press reports that I an under investigator for issues dating back to the period when I was bishop of Savona," Calcagno told ANSA. "I'm serene about the work I did. I trust the Italian judiciary and am confident that the case will develop in a positive way"