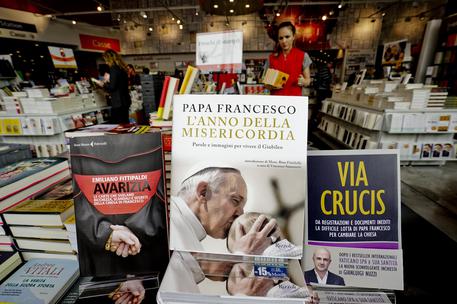 (ANSA) - Rome, November 23 - The trial of journalists Emiliano Fittipaldi and Gianluigi Nuzzi Tuesday in the Vatican for their books about the Holy See, "Avarice" and "The Way of the Cross," is a trial against freedom of the press as well as the two reporters, the pair have said.
Together with the two accused of divulging Holy See confidential documents also being tried are alleged whistleblowers, Monsignor Lucio Angel Vallejo Balda and Francesca Immacolata Chaouqui, as well as Vallejo's former assistant Nicola Maio, all of them also accused of criminal association for having taken documents from the Vatican's financial affairs committee and passing them to the two reporters.
Nuzzi and Fittipaldi, who under Vatican law face potential sentences of four to eight years in prison if found guilty, indicated they would be present in court but both strongly protest the trial of journalists merely for doing their job and threatening thereby the freedom of information.
"What is opening is not a trial against me but a trial against freedom of the press," Fittipaldi wrote in a letter to la Repubblica.
"Vatican jurisprudence considers the very essence of our profession to be a crime, that is to say the duty to publish facts that authorities, in whatever form they take, want to keep hidden from the public".
Regarding the accusation of having put at risk "vital interests of the Holy See," he asked "did the stories on the Vatican real estate wealth or the necessary costs for relatives and religious orders to canonize their candidate really threaten the national security of the Vatican? I doubt it".
Faced with the revelations in his book "in the end they preferred to criminalise not the merchants in the temple but those who smashed them." he said.
The journalist from l'Espresso magazine underlines that in the Vatican "there is no law comparable to article 21 of our Constitution, no defence of the right of reporting, or professional code that allows journalists to apply professional secrecy to protect their sources".
Nuzzi for his part, writing on Twitter and Facebook under the hashtag #noinquisizione, launched a campaign of against gagging information.
"You can't put people on trial for giving information. The politicians are silent, the Order of Journalists too," he tweeted.
"At the trial nobody is charged with theft. The true theft is in the Vatican, as reported in the book, but nobody must talk about that".
"The Vatican court forbids lawyers to give the defendants copies of the court documents, we can only look at them. Shame!" Supporters of the two reporters have been active on social networks with readers posting photos of themselves with their books in their hands.
In Vienna the OSCE, through its representative for media Dunja Mijatovic, asked the Vatican authorities to withdraw the criminal charges against the two journalists.