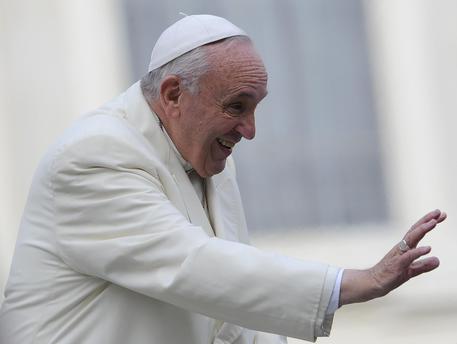 (ANSA) Vatican City, November 20 - Pope Francis on Friday said the Catholic Church should choose its seminarians more carefully, saying some priestly hopefuls are men with psychiatric problems looking for a protective structure.
Francis warned clergymen to "keep their eyes open" with respect to the admission to seminaries of men wanting to join the priesthood.
"There are young men who are psychologically ill and are looking for strong structures to protect them," the pope told the Congregation for the Clergy. These include "the police force, the army and the clergy," he said. Francis went on to talk about the priestly vocation. Priests "are not professionals in pastoral care or evangelisation, who turn up and do what they have to, perhaps even well, but as if it were a job," he said. They are not "philanthropists or public officials, but fathers and brothers" who are called "to be among people," continued the pope, recalling also that formation does not happen "in a laboratory but within the family". The pope also urged bishops to remain "close to" to their priests.
"Closeness and residency: the decree on residency is still in force, if you don't feel able to remain in your diocese, resign," he said.
Francis also instructed priests never to send people away from confession without at least a blessing. "It is always possible to find a way. If you can't give an absolution explain: 'God loves you, he wants you, I can't absolve you but I can give you a blessing, the sign of God's love for you'," he said.
The pope also issued another warning over Church corruption by Mammon on Friday.
The Catholic Church should not adore the "holy kickback" but take strength and joy from the word of Jesus, he said at a Vatican Mass. "There is always in the Church the temptation of corruption," he said. This happens when, "instead of being attached to faith in the Lord Jesus," people are "attached to money and power". Francis quoted the passage from the gospel of Luke in which Jesus drives out the merchants from the Temple.
"Jesus does not drive out the priests, the scribes; he drives out the ones doing business, the merchants in the Temple," he said.
"But the high priests and the scribes were linked to them: the 'holy kickback' was there! They took from them, they were attached to money and worshiped this saint," Francis insisted. "Where there is Jesus there is no room for worldliness, there is no room for corruption!" he said.
"And this is the battle each one of us must fight, this is the daily battle of the Church: always Jesus, always with Jesus, always hanging from his lips, to hear his word; and never to seek security in another master. Jesus said it is not possible to serve two masters: or God, or wealth; or God, or power," the pope concluded. Francis, who has repeatedly warned against worldly temptations, is trying to reform the Vatican Bank and rein in spending by prelates.
http://popefrancisnewsapp.com/