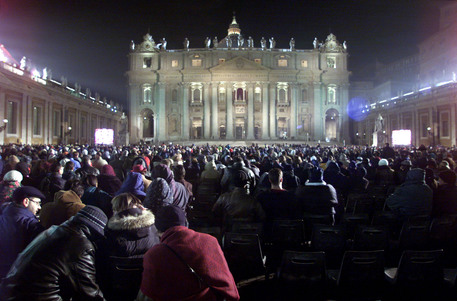 (ANSA) - Rome, May 12 - Transport, traffic, medical care and security were among the issues discussed by government, city and regional officials at a planning meeting Tuesday in view of the Catholic Church's extraordinary Jubilee of Mercy beginning December 8.
"The government and local institutions agreed on the need to speed up delineation of the actions - in the first instance legal and financial - needed to get the organisational machine moving quickly," the executive said in a statement.
Government undersecretary Claudio De Vincenti, Rome Mayor Ignazio Marino, Lazio Regional Governor Nicola Zingaretti, Rome Prefect Franco Gabrielli and representatives of the economy ministry all attended the meeting. Marino said the "minimalist" interventions needed to begin by early June at the latest to enable the city to be ready in time to receive the millions of pilgrims expected for the extraordinary Holy Year.
These include patching up the asphalt on main roads, creating park and ride facilities in outlying areas and introducing special transport links between areas of worship and the catacombs, including bicycle and pedestrian routes, Marino said.
"The Vatican has asked specifically for the creation of bicycle and pedestrian routes," the mayor explained. "The Holy Father would be pleased if many of the people arriving in Rome could complete the last part of their journey on foot like real pilgrims," Marino continued.
Restoring and reactivating the final section of ancient pilgrimage routes such as the Via Francigena leading from Canterbury to Rome and redeveloping the areas around Rome's main basilicas are also on the list of things to do, the mayor said.
Rome authorities have also asked for the rules governing local spending under the domestic stability pact to be loosened to cover the necessary expenditure. Francis announced the special Jubilee year to begin December 8 and end November 20, 2016 on the second anniversary of his election last March to underscore a central spiritual theme of his pontificate.
http://popefrancisnewsapp.com/