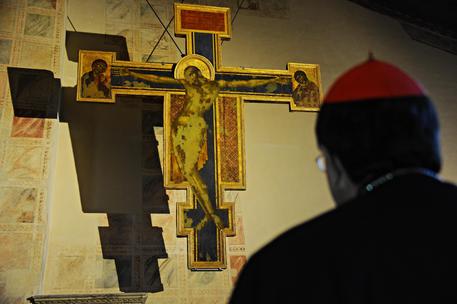 (ANSA) - Rome, April 1 - A course on exorcism aimed at training members of the clergy as well as laymen to fight demonic possession will be held at Rome's European University on April 13-18, sources said Wednesday.
The course titled 'Exorcism and Prayers of Liberation' is now in its 10th edition and was organized by the Sacerdos Institute - a Mission Network, Inc. program for priest support and continuing education - and the Bologna-based Social and Religious Information Research Group (GRIS).
The course comes under the patronage of the Vatican's Congregation for the Clergy.
It is designed to teach priests, psychologists, teachers, doctors and other lay people how to differentiate between a bona fide case of possession by the devil and assorted psychiatric illnesses.
"We live in a highly secularized society with tendencies to open the door to the occult and to esoteric practices," said Father Pedro Barrajon, director of the Sacerdos Institute.
Practicing magic and turning to fortune-tellers "favors the devil's action" and can cause one to become possessed, the priest said.
Indeed the course pursues the objective not only of acquainting participants with the theme of exorcism from a theological and scientific perspective, but also of helping them deal with the dangers of sects, magic, occultism, Satanism and nihilism, especially among the young.
It also strives to provide insight into "the theological basis of the action of angels and demons", the rites and liturgical practices of exorcism, the biblical aspect "in relation to the exorcist actions of Jesus Christ", and exorcism in relation to other fields such as psychology, medicine and the law.
Father Jesus Villagrasa, rector of the Pontifical Athenaeum Regina Apostolorum in Rome, will open the six-day event, while Father Barrajon will present the course.
Cardinal Mauro Piacenza will deliver the introductory speech and Monsignor Luigi Negri, archbishop of Ferrara-Comacchio, will give a 'lectio magistralis', or keynote speech.
Other leading experts who will intervene throughout the six days include Professor Giuseppe Ferrari, director of GRIS; Monsignor Davide Salvatori, prelate Auditor of the Roman Rota tribunal; exegetical theologian and historian, Monsignor Helmut Moll; Father Aldo Buonaiuto, who heads the anti-sect service of the Community Pope John XXIII; Anna Maria Giannini, a professor of psychology at Rome's La Sapienza University; Enrico De Simone, deputy police commissioner in Ancona; and Rome prosecutor Michele Nardi.
A round table will be held at the end of the course with the participation of exorcists including Father Francesco Bamonte, Father Franois Dermine, Father Cesar Truqui and Father Benigno Palilla.