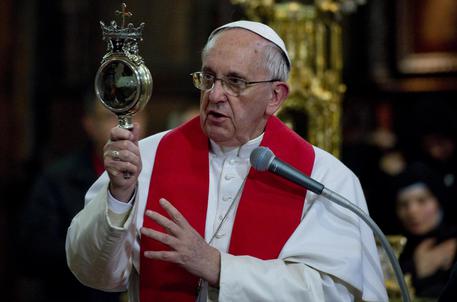 (ANSA) - Vatican City, March 23 - Pope Francis this week will complete the final draft of his encyclical on ecology slated for publication this summer, Vatican deputy press officer Father Ciro Benedettini said Monday. The pontiff had announced his intention to do so while flying from Sri Lanka to the Philippines on January 15. "It is important there be some time between the publication and the (next UN climate change summit in Paris in December)," said Francis. The last such summit was held in Lima in December 2014.
"Not much was concluded in Peru," said the pope. "I was disappointed at the lack of courage".
Interfaith dialogue is key to moving forward on environment and climate change as on so many others, he went on. Since that trip, Francis has continued to keep Vatican institutions focused on environmental issues. On March 2, for example, he shone the spotlight on the Pan-Amazon Ecclesiastical Network (REPAM) for the defense of the Amazon rainforest with a presentation in the Vatican to give it more visibility and international support. REPAM was founded in September 2014 in Brazilia on the inspiration of words uttered by the pontiff in Rio, and aims to join forces in defense of the rainforest and the human rights of its indigenous peoples and to help other efforts in similar situations elsewhere in the world.
The network also aims to promote an alternative development model based on solidarity, one that won't organize society and the exploitation of nature based solely on economic interests.
The Amazon is the most precious area of the world in terms of planetary survival. It is made of six million square kilometers of tropical forest lying in the countries of Bolivia, Brazil, Colombia, Ecuador, French Guinea, Guyana, Peru, Suriname, and Venezuela.
But 20% of this world heritage has already gone up in smoke through deforestation to the benefit of multinationals and to the detriment of the 390 indigenous tribes who live there. "Water is the most essential element for life," the pope said during Angelus prayers Sunday. "The future of humanity depends on our capacity to safeguard and share it".
http://popefrancisnewsapp.com/