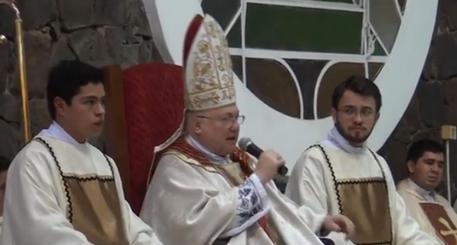 (ANSA) - Vatican City, September 26 - A Vatican spokesman on Friday shrugged off angry comments from a Paraguayan bishop who said Pope Francis "must answer to God" for his suspension amid allegations of embezzlement and covering up sexual abuses.
"It was a very violent reaction," Father Federico Lombardi said when asked about the reaction of Msgr. Rogelio Ricardo Livieres Plano, removed Thursday from his role as head of the Diocese of Ciudad del Este in Paraguay.
"Maybe it is easier to understand why there was a problem," added Lombardi.
In a letter to the Prefect of the Congregation for Bishops, Canadian Cardinal Marc Ouellet, Livieres called his suspension "unfounded and arbitrary" and added that Francis "must answer to God, rather than to me".
In the letter, obtained by local media, Livieres also said that some other bishops in Paraguay hatched a plot against him, suggesting he has been "persecuted" for what he called "the many human errors that I may have committed".
He also hinted at hypocrisy by the pope.
"Despite the many speeches on (the value of) dialogue, mercy, openness, decentralization and respect for authority of the local Churches, I have not had the opportunity to talk with Pope Francis, to clarify any doubts or concerns," wrote Livieres.
http://popefrancisnewsapp.com/