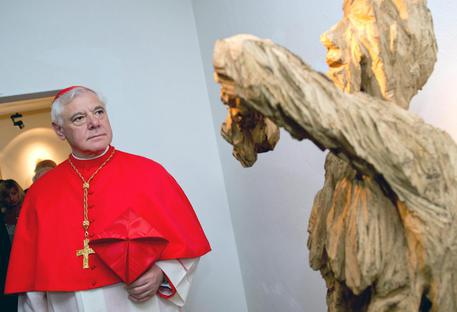 (ANSA) - Vatican City, September 17 - No man, not even the pope himself, has the power to sever the bonds of marriage, German Cardinal Gerhard Ludwig Mueller said in a book titled The Hope of the Family.
"When we are in the presence of a valid marriage, there is no way to sever that bond," Mueller said in the interview-format book by Ares publishers, to be released ahead of an extraordinary synod on the family in October.
"Neither the pope nor any other bishop has the authority to do so, because it touches on a reality that belongs to God, not to them".
Therefore, divorced individuals who marry a second time must not be allowed to receive communion, because that would mean questioning the indissolubility of the marriage sacrament, Mueller explained.
"Indissoluble marriage...removes the individual from the will and the tyranny of feelings...and protects children above all," said the cardinal, who was appointed prefect of the Congregation for the Doctrine of the Faith by Pope Emeritus Benedict XVI in 2012.
Vatican observers say the synod on the family will likely see a clash between bishops who would like to see the Church adopt a more open stance to divorced Catholics and defenders of the doctrine as it stands.