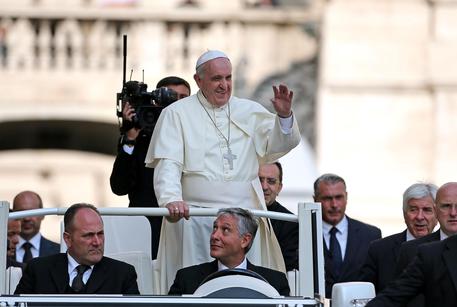 (ANSA) - Vatican City, September 10 - Pope Francis on Wednesday praised Italy's "admirable" Mare Nostrum sea-rescue program that has saved thousands of desperate migrants fleeing war and famine for safety in Europe.
During his general audience in St. Peter's Square, the pope praised the work of the Italian government as well as the Navy's sailors and officers involved in the program established almost one year ago after two migrant boat disasters that killed about 400 people.
Francis said the program, which is to be replaced in November by a larger European initiative called Frontex Plus, was "admirable work". "Thank you for your admirable work on behalf of so many brothers and sisters in search of hope. Thank you. Thank you so much," said the pope.
Mare Nostrum (Our Sea) has been controversial, with some political parties complaining that it has encouraged human traffickers.
Francis showed his sympathy and concern for migrants soon after he was elected pope, by travelling in March 2013 to visit a migrant centre in Lampedusa, Italy's southern-most spot and the closest European landing point to North Africa.
http://popefrancisnewsapp.com/