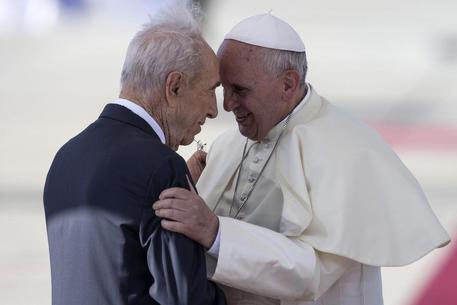 (ANSA) - Rome, September 4 - Former Israeli President Shimon Peres said he has proposed the formation of a United Religions organization to combat terrorism during a meeting at the Vatican on Thursday.
"The UN has had its time," Peres was quoted as saying by Catholic weekly Famiglia Cristiana. "What we need is an organization of United Religions, the UN of religions.
"It would be the best way to combat these terrorists who kill in the name of their faith, because most people are not like them, they practise their religions without killing anyone, without even thinking about it.
"I think that there should be a charter of the United Religions, just like there is the UN Charter. "The new charter would serve to establish in the name of all the faiths that slitting people's throats or conducting mass slaughters, like the ones we have seen in recent weeks, has nothing to do with religion.
"This is what I proposed to the pope". http://popefrancisnewsapp.com/