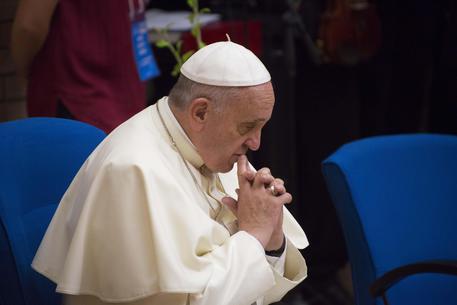 (ANSA) - Vatican City, July 7 - Six adult survivors of childhood sexual abuse at the hands of priests on Monday took part in a Mass said by Pope Francis in St. Martha's church. The survivors, who are from Germany, Ireland and the UK, were set to meet with Francis after Mass, which he celebrates weekday mornings in the small church adjacent to the Vatican guesthouse where he lives.
This will be the first time Francis meets with victims of pedophile clergy.
The reformist pope warned while returning from his trip to the Holy Land in May that not even bishops are exempt from investigation, and that three are currently being probed by church authorities on suspicion of child abuse.
Vatican authorities in June defrocked a former papal nuncio or ambassador to the Dominican Republic, Jozef Weselowski, prior to putting him on juridical trial for alleged child sexual abuse while in the Caribbean country. As well, Pope Francis' new anti-abuse commission met Sunday for the second time since the pontiff appointed it in March in a move intended to demonstrate resolve about confronting the child sexual abuse scandals that have rocked Catholicism.
The pope tapped three clergy and five lay people from eight countries, with seven from Europe or the United States, including four women.
Among his appointees are Cardinal Sean P. O'Malley, one of Francis' key advisers and the archbishop of Boston, where the US pedophile priest scandal erupted in 2002, and Marie Collins, who was assaulted as a 13-year-old by a hospital chaplain in her native Ireland and has gone on to become a prominent campaigner for accountability in the church.
Francis faces mounting criticism for a perceived blind spot on the abuse scandals, which have cost Catholic dioceses and religious orders around the world billions of dollars in legal fees and settlements.
His predecessor Benedict XVI was the first Catholic pope to meet with victims of sexual abuse by priests, in Washington in 2008. He then met with sexual abuse survivors Australia, Germany, Malta and the UK.