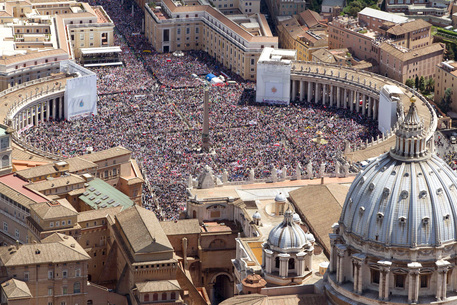 (ANSA) - Vatican City, April 25 - Rome was bracing for the arrival of millions of pilgrims on Friday ahead of the canonization of two popes, John XXIII and John Paul II, on Sunday.
The Italian capital was getting ready by boosting security across the city, particularly in St. Peter's Square where access will be regulated and, in some parts, limited strictly to foot traffic starting Saturday evening.
In addition, Rome's Fori Imperiali, a major thoroughfare that connects the Roman Forum to the Colosseum, was closed to traffic daily for over two weeks leading up to the popes' elevation to the sainthood.
To compensate for the limited car traffic, the A and B subway lines were operating non-stop through Sunday.
More than 2,000 municipal police officers were being deployed, and giant video screens were being placed in St Peter's Square as well as in some of Rome's most prominent gathering spaces - Piazza Navona, Piazza Farnese and Castel Sant'Angelo - to show the ceremonies.
MORE SECURITY, 2,430 ADDITIONAL SECURITY OFFICERS The interior ministry has intensified security across the city and around sensitive targets with an additional 2,430 police officers to be deployed for the event which will be attended by an estimated 800,000 pilgrims, 61 delegations representing 54 countries, 19 heads of State, 24 premiers and 23 ministers.
The municipal government has approved the following plan to welcome tourists.
PEDESTRIANIZATION OF FORI IMPERIALI Via dei Fori Imperiali is completely closed to traffic through May 4.
Only pedestrians will be allowed from Piazza Venezia to Piazza del Colosseo and the total ban on all traffic will end on May 4 at 7 pm.
NON-STOP METRO SERVICE AND REGULATIONS FOR BUSES Non-stop metro services for the A and B lines with buses connecting the subway stops with St. Peter's have been planned.
Also, the number of permits for tourist buses will be the same as the number of parking spaces available, an estimated 4,326.
The A and B subway lines will be operating non-stop day and night on Saturday and Sunday and until 12.30 am on Monday.
Only buses with a 'G' permit, granted for 'great events' which includes a parking space and costs 50 euros, will be allowed access.
Security forces will be checking bus permits on the Rome ring road.
The 64 and 40 bus lines will operate 24 hours a day throughout the month of April.
LIMITED ACCESS TO ST PETER'S AND SECURITY CORRIDOR Among the latest details in the municipality's plan is to have "off-limit" areas in St. Peter's Square, delineated by barriers.
In order to prevent pilgrims from congregating in St.
Peter's Square and Via della Conciliazione, beginning Saturday night, the areas will remain entirely closed to traffic as well as to pedestrians.
On Sunday, pilgrims will be allowed to enter the square only through Via della Conciliazione, starting at 5.30 am.
Officials will try to regulate access to the area and a "security corridor" has been planned from Piazza Venezia to St Peter's, as far as Porta Cavalleggeri - a corridor intended for international delegations, security forces and ambulances.
CRACKDOWN ON ILLEGAL STREET VENDORS The municipality is boosting the number of city police officers on duty to control traffic and crack down on illegal street vendors.
On Saturday, 1,209 officers will be deployed in the historic city centre and 930 in the Prati-St Peter's neighbourhood.
On Sunday, 1,011 officers will be deployed in the city centre and 930 others around the Vatican.
WASTE AND CHEMICAL TOILETS Almost 1,000 portable toilets are being installed throughout areas in Rome expected to attract the largest crowds.
Some 439 will be in the area of St. Peter's alone, while 541 will be allocated elsewhere in Rome.
Overall, 1,200 operators will be cleaning and collecting waste.
48-HOUR ROME PASS A card given to tourists and pilgrims will be valid for two days and will cost 28 euros.
The card will give unlimited access to subways, buses and trams and will enable tourists to visit monuments, museums and archaeological areas for free or with a discount.
14-HOUR CIVIL PROTECTION AND FOUR MILLION BOTTLES OF WATER An estimated 2,630 civil protection volunteers will be on call around the clock and they will be distributing four million bottles of water.
LARGE SCREENS AND WELCOME CENTRES In order for tourists and pilgrims to be able to watch the canonizations on television, three large screens will be installed along Via dei Fori Imperiali while another four will be placed in Piazza Navona, Piazza Farnese, Castel Santi'Angelo and Piazza S. Maria Maggiore.
Viewers will be given the opportunity of watching the event live in different languages.
http://popefrancisnewsapp.com/