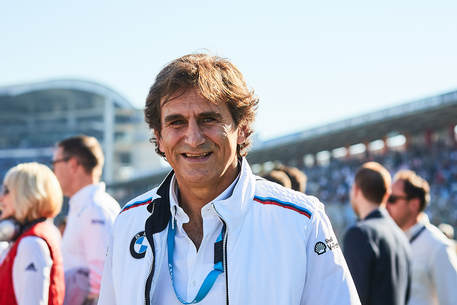 (ANSA) - ROME, SEP 21 - Former F1 racing driver and handbike champ Alex Zanardi was discharged from a Vicenza hospital Tuesday 76 days after a solar panel fire knocked out the machines helping him recover from a catastrophic crash with a lorry in June 2020.
The chief surgeon in the ward that looked after Zanardi said his condition had now been stabilised and the panels and machines repaired so he can continue his rehabilitation.
Paralympic handbike champ Zanardi spent last Christmas at home with his family, and then continued his treatment at home near Padua until the solar panel fire that knocked out his rehab machines.
The 56-year-old former Formula One driver suffered serious head injuries in a road accident while he was on his handbike near Siena on June 19, 2020.
Zanardi's wife said a year ago her husband was communicating but was still not able to talk.
Zanardi raced in F1 from 1991 to 1994 and again in 1999, placing sixth in the 1993 Brazilian GP.
The four-time Paralympic champ, 53, lost his legs in a CART crash in 2001.
He returned to racing less than two years after the CART accident, competing in the European Touring Car Championship in 2003-2004 and then in the World Touring Car Championship between 2005 and 2009, scoring four wins.
In addition to continuing to race cars, Zanardi took up competition in handcycling, with the stated goal of representing Italy at the 2012 Summer Paralympics.
In September 2011, Zanardi won his first senior international handcycling medal, the silver medal in the H4 category time trial at the UCI World Road Para-Cycling Championships.
In September 2012 he won gold medals at the London Paralympics in the individual H4 time trial and the individual H4 road race, followed by a silver medal in the mixed H1-4 team relay, and in September 2016 he won a gold and a silver medal at the 2016 Paralympics in Rio de Janeiro. (ANSA).