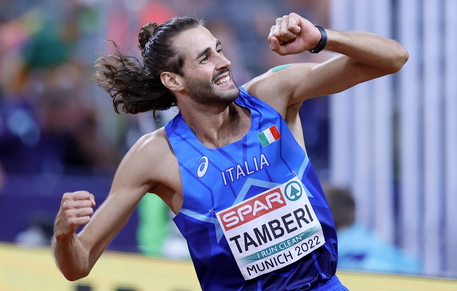 (ANSA) - ROME, AUG 19 - Italy's joint Olympic champion Gianmarco Tamberi won the high jump gold at the European athletics championships in Munich on Thursday evening.
The 30-year-old from Civitanova Marche jumped 2.30 metres to make up for the disappointment of finishing fourth in last month's world championships at Eugene, Oregon.
The flamboyant Marche athlete celebrated in his usual passionate way, showing off the engagement ring he had just swapped with his future wife, who celebrated with him.
Speaking to Raisport after his win, Tamberi said "I'm going on my stag do tomorrow night with the European gold around my neck, two weeks before I marry Chiara, the woman of my life".
He said he was not sure whether he would continue to be trained by his father after recent up and down results saw him ditch his dad and then rehire him.
"His is a slice of this success, who has been working with me for 13 years," said Tamberi.
Tamberi said he had been worried he might slip in the rain and had told himself "it's now or never".
It is Italy's second gold in Munich after double Olympic champ Marcell Jacobs won the 100 metres. (ANSA).