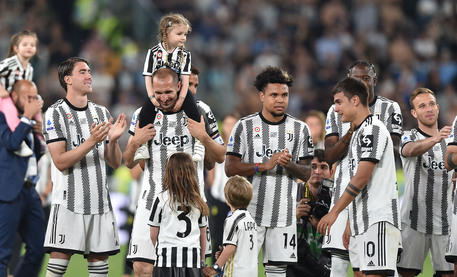 (ANSA) - ROME, MAY 17 - There were emotion scenes at the end of Juventus's 2-2 draw with Lazio on Monday as the Turin giants' home fans bid farewell to two of their best loved players, Italy captain Giorgio Chiellini and Argentina forward Paulo Dybala.
Chiellini, 37, looks set to retire from the game, having won nine Serie A titles and five Italian Cups, among other honours, and played in two Champions League finals since joining Juve in 2005.
After leading to Azzurri to victory at Euro 2020 last year, Chiellini is set to say goodbye to the national team when Italy take on South American champions Argentina in the so-called 'Finalissima' at Wembley on June 1.
Dybala, meanwhile, is set to move to a new club after failing to agree on a contract renewal with Juve.
"It was an emotional night," said Juve boss Massimiliano Allegri.
"It was difficult not to cry".
The draw enabled fifth-placed Lazio to seal qualification for next season's Europa League. (ANSA).