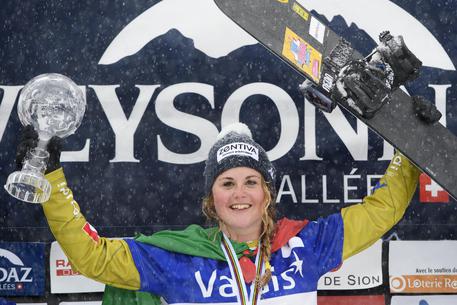 (ANSA) - ROME, FEB 4 - Snowboarder Michela Moioli was Italy's flag-bearer at the opening ceremony of the Beijing Winter Olympics Friday, leading a 118-strong team that is bidding to beat its best haul ever, the five golds it garnered on home turf in Turin in 2006, as well as the three golds it won at PyeongChang 2018.
Moioli replaced Alpine skier Sofia Goggia, who is battling to be fit for the Games after suffering a knee injury racing at Cortina d'Ampezzo late last month.
The 29-year-old has started physiotherapy and will try to defend her downhill Olympic title despite damaging anterior cruciate ligaments in her knee and fracturing her fibula.
Italian President Sergio Mattarella has sent Goggia, who has won four of the season's five World Cup downhills, a message of encouragement in her fitness battle, saying he was "cheering for you".
Italian Olympic Committee President Giovanni Malago' talked to Goggia before bringing in Moioli, the reigning Olympic champion in the women's snowboard cross event, for the opening ceremony.
Sports Undersecretary and fencing legend Valentina Vezzali wished the 118 athletes well and said she was "sure they will make Italy dream". (ANSA).