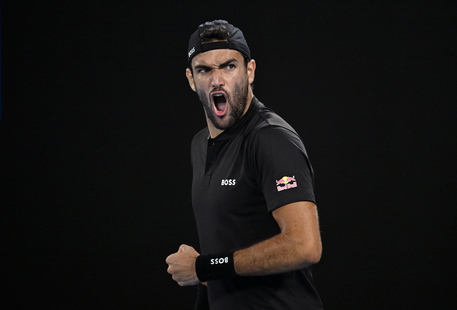 (ANSA) - ROME, JAN 25 - Italian seventh seed Matteo Berrettini became the first Italian man to get into the semi-finals of the Australian Open Tuesday by beating France's 15th seed Gael Monfils 6-4, 6-4, 3-6, 3-6, 6-2 and will meet no 5 seed and Spain great Rafa Nadal who is gunning for a record 21st Grand Slam victory.
Berrettini broke Monfils twice in the fifth after being pegged back after winning the first two sets in a hotly contested match where the Italian also had to battle a Melbourne crowd that was mostly rooting for the French veteran and sometimes put the Roman off his serve.
The 25-year-old, who lost to Serbian great Novak Djokovic in last year's Wimbledon final, thus became the first Italian to get into the Australian Open semis after many Italian greats had come close in the past.
Another Italian, 20-year-old world number 10 Jannik Sinner, will play Greece's 23-year-old fourth seed Stefanos Tsitsipas in another quarterfinal Wednesday.
World number 2 Daniil Medvedev of Russia, who plays Canadian Felix Auger-Aliassime in the quarters Wednesday, is the tournament favourite after world no 1 Djokovic was controversially banned from taking part and deported asa public health risk over his failure to get jabbed for COVID-19.
The Australian Open website congratulated Berrettini on his achievement saying: "Bravo, Matteo 👏🇮🇹 Berrettini becomes the first Italian man in singles history to reach the final four at the Australian Open".
Nadal, who is bidding to overtake Djokovic and Swiss legend Roger Federer in the Greatest of All Time (GOAT) conversation, avoided a repeat of last year's quarterfinal heartbreak to reach his seventh semifinal at the Australian Open.
Nadal, 35, held off Canada's Denis Shapovalov 6-3 6-4 4-6 3-6 6-3 in four hours to the delight of the majority assembled at Rod Laver Arena in Tuesday's afternoon heat, 11 months after relinquishing a two-set lead against Tsitsipas.
Berrettini's only previous meeting with the Spaniard was a straight-sets loss in the 2019 US Open final four, having also ousted Monfils in the last eight in New York that autumn.
"That was the only time I've played Rafa and was a really tough match for me," said Berrettini.
"He won the tournament afterwards. Was my first semifinals. I didn't really know what to expect and even though the first set I had set points, so I'm pretty sure it's gonna be a great fight. "He played five sets as well today. So he needs to rest as well." "It feels unbelievable. And hopefully tomorrow is gonna be a second one," added Berrettini, beating his chest, with countryman Sinner in action against Tsitsipas.
"I'm really happy for myself, was another great fight again against Gael. Great match, a lot of emotions. I thought I had him in the third (set) and then I found myself in a fifth, but I really fought hard and I put everything in the court. That's what I said to myself, and that's why I'm really happy.
"I'm really good friends with Jannick. I'm friends with Stefanos. I wish them best of luck, but I'm gonna watch for sure." (ANSA).