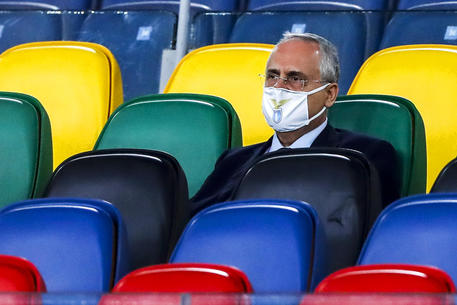 (ANSA) - ROME, OCT 19 - An Italian Soccer Federation (FIGC) federal tribunal on Tuesday banned Lazio Chairman Claudio Lotito from football for two months and fined the Rome club 50,000 euros for breaching the game's COVID-19 protocol, sources said.
An earlier FIGC court had banned him for seven months and fined the club 150,000 euros.
Club doctors Ivo Pulcini and Fabio Rodia were banned for five months, down from 12 months in the March 26 ruling, according to the sources.
The case regards a furore over the fact that some players were negative in tests performed by a lab used by the club last year to obtain the all clear to take part in Serie A matches but positive in COVID tests done at another centre ahead of UEFA Champions League games.
A lawyer for Lotito hailed the reduced sentences as "true justice".
The Roman businessman has already served the two months and will be able to return to the Lazio dressing room for Thursday's Europa League clash with Marseille. (ANSA).