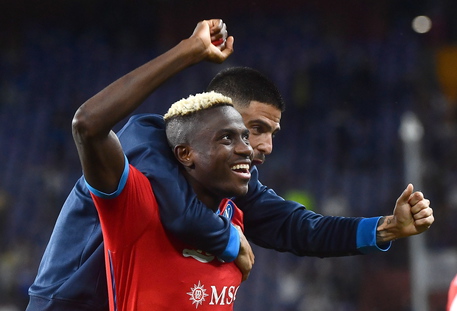 (ANSA) - ROME, SEP 24 - Napoli continued their perfect start to the Serie A campaign by winning 4-0 at Sampdoria Thursday night to reclaim top spot in the Italian championship.
A brace by 21-year-old Nigeria striker Victor Osimhen, a 2020 signing from French champs Lille, and goals from Fabian Ruiz and Piotr Zielinski sealed a memorable victory for the Azzurri at Marassi.
Napoli are now two points clear of champions Inter Milan and city rivals AC Milan, both on 13 points.
Roma rose to fourth, on 12 points, with a 1-0 win against Udinese at the Olimpico.
Osimhen couldn't hide his delight after scoring twice to help Napoli to their impressive 4-0 win over Samp.
"I'm really happy," said the Nigerian striker, speaking after the game. "It was important for me to start the season well and I want to thank the coach for his confidence in me. I'm honoured to play for this club." Osimhen has been in scintillating form so far this season, following a disrupted debut campaign in Serie A.
"Last year I had COVID and then got a bad injury," he said. "I'm in good shape this season. I'm training consistently and I'm listening to the advice the coach gives me and the help I get from the team. I'm pleased with what I'm doing but I know I need to continue working hard. We all need to continue down this track." Luciano Spalletti praised his team but urged the Azzurri to keep their feet on the ground after their flawless start to the 2020/21 campaign.
"It was a deserved win which we're pleased about, but we need to keep calm and continue working," said the Napoli boss, speaking after the final whistle on Thursday night. "The lads did very well, particularly in the first half, because Sampdoria caused us problems. We were able to stand up to it and [David] Ospina did brilliantly to make a couple of tricky saves." Spalletti credited his side for coming through those challenging moments early on before taking control of the game as the first half wore on.
"We did well to stand firm during the tough moments and then kick on when we had the ball," he said. "We got the game where we wanted it, partly through individual plays, and we took our chances well." The Napoli boss also had word for Victor Osimhen, who scored two of the Azzurri's four goals in Liguria on Thursday night.
"Victor is doing well and working hard for every ball," he said.
"He finishes his chances very well. I think we did well to read the game, both when there were challenges and when there were more positive moments." The result at Marassi leaves Napoli top of the table on maximum points after the first five games of the season - but Spalletti preached caution as he spoke to the media following the game.
"I don't want to talk about the table because the average points you need to get into the Champions League is about 85," he said.
"That shows that we still need to get another 70 or so. We can start talking about objectives now. It's easy to get carried away, so we need to be strong and focus on our ideas.
"Of course there is confidence there, but this is only the beginning. I'm well-aware that the Azzurri fans are showing us an incredible amount of love, but we need to use that to continue working with the same level of dedication. We need to keep doing what we're doing, stay calm and keep the right mentality." ea7-banner-hp EA7_SSCN sscn-charity-300x300_1 lete_HP mac_2x1 (ANSA).